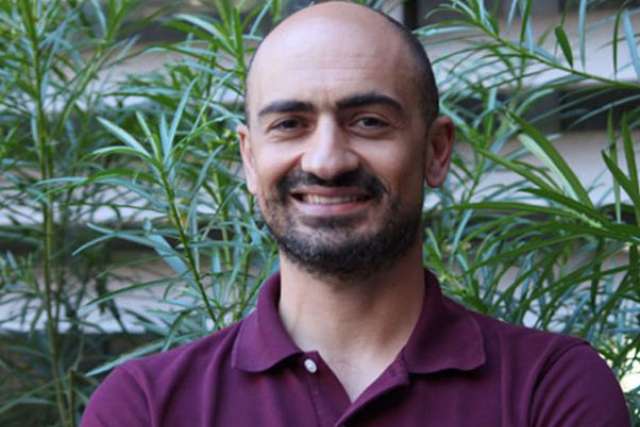 As a pre-med major at UC San Diego studying biochemistry, Ippolytos Kalofonos discovered his future career while listening to a guest lecturer at an undergraduate seminar.

Here was a field that wove together his interests in health, medicine and social context, he learned after listening to the medical anthropologist. Kalofonos was always interested in broader issues beyond the lab where he worked. He volunteered at a Red Cross emergency room in Tijuana, and was struck by the various forms of inequality “that were swirling around me” locally, nationally and globally.

“I was really excited by the idea of medicine as a social and cultural system, rather than as just a technical skill set,” he recalled of that moment.

Today, Kalofonos is right where he wants to be. A psychiatrist and medical anthropologist with a deep background in HIV/AIDS treatment and the cultural issues that surround it in Africa, Kalofonos has a joint appointment to the UCLA International Institute and the Semel Institute for Neuroscience and Human Behavior. In the spring, he will teach his first course in global health, “Living with HIV/AIDS in Africa,” for the International Institute.

Much has changed since Kalofonos decided to change his major to anthropology and sign up for a study-abroad program in southern Mexico, where he worked with traditional healers and began delving into critical development studies.

After finishing his undergraduate degree, he attended medical school at UC San Francisco. Initially, he was interested in infectious diseases so he completed a master’s degree in public health in epidemiology through a joint program with UC Berkeley. While at UC Berkeley, he got to know other medical students who were pursuing Ph.D.s in medical anthropology and realized, “These are my people — this is what I want to do.”

Kalofonos first completed medical school and master’s degree coursework, then earned a Ph.D. in medical anthropology. He then returned to medical school to complete a year of clinical rotations. Finally, he finished his residency in psychiatry at the University of Washington.

“Coming out of anthropology — where I spent a lot of time listening to people, paying careful attention to their language and their words — I found psychiatry had this obvious appeal that it hadn't had before,” said Kalofonos, who joined the UCLA faculty last year.

One vivid lesson of how essential it is to look beyond the biological realm to effectively treat people came to Kalofonos when he followed a cohort of HIV-positive patients who were receiving anti-retroviral treatment in Mozambique.

His research, which became the foundation for his Ph.D. dissertation, yielded surprising results. The health of HIV-positive patients in the program improved, but they complained of an unusual side effect: overwhelming hunger — an outcome that his UC San Francisco medical school professors had never encountered.

Kalofonos knew that central Mozambique is extremely poor with high rates of malnutrition and hunger. But as he contemplated the condition and discussed the issue with people further, he said, “They were saying that they were getting better — they were getting their health back — but they still lacked livelihoods.” His ethnographic research showed that, as people got better, they went on a quest to procure food and material sustenance.

“What really surprised — if not blindsided — me,” he said, “was how people in Mozambique felt betrayed by the program. They were grateful for their medication, but they felt just getting pills was not enough.” To these patients, it made no sense that Western organizations would come halfway around the world to help them overcome HIV, only to let them die of hunger.

The biological focus of the treatment effort — getting drugs into bodies — was ultimately seen as falling short of the care many Mozambicans sought. This was articulated by the phrase he heard repeatedly from people receiving treatment for AIDS: “All I eat is ARVs (antiretroviral pills).” Kalofonos explained, “I understood this as a critique of an intervention that exacerbated hunger without adequately addressing it, even as it saved lives.

“From the perspective of people being treated for AIDS in Mozambique, hunger infected and altered the therapeutic experience,” he said. “The hunger expressed both a painful embodied reality and a powerful moral metaphor for antisocial accumulation and inequality.”

These dynamics, he explained, highlight the narrow scope of the vision of care of this global health intervention, a vision structured by ideas of scarcity and sustainability.

Currently, he continues to track the issues of AIDS and hunger in Mozambique while also overseeing residents and medical students working at a psychosis clinic and in a homeless integrated care program in the VA West Los Angeles Medical Center. At the Semel institute, he works with a cohort of M.D.-Ph.D. students while continuing to do his own research. In addition, a book he is writing based on his dissertation will be published later this year by University of California Press.

“I think there are a lot of lessons to be drawn from [the project],” said Kalofonos. “One is that it’s a mistake to go in with a narrow technical approach and think you are addressing a health problem by only providing technology and not [looking at] the bigger picture.”

But he cautioned, “The AIDS epidemic is a social and political problem, not simply a biological problem. There is never a magic bullet. It’s really the process that’s important. There needs to be a reflective process where communities can respond to issues like these.”

This story was adapted from one posted on the UCLA International Institute website.