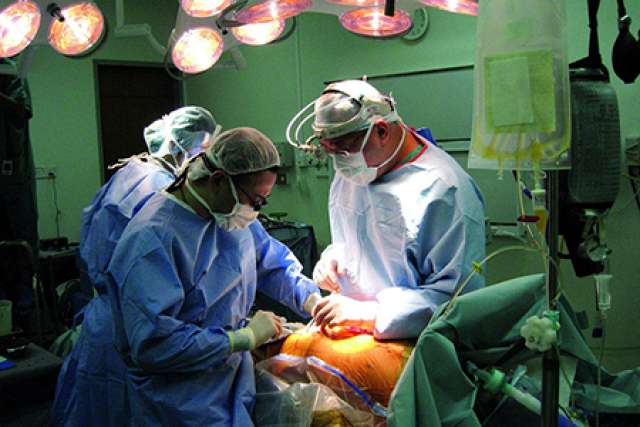 The researchers concluded that the antibiotics inhibited the bacteria that causes inflammation, which in turn can lead to organ rejection.

A UCLA-led research team has found that giving mice antibiotics for 10 days prior to a liver transplant leads to better liver function after the surgery.

After concluding the experiment mice, the scientists discovered data from liver transplants performed between October 2013 and August 2015 at the Ronald Reagan UCLA Medical Center, revealing that the same phenomenon appears to hold true in humans. The statistics from human patients even demonstrated that the people who were in worse health prior to their surgeries but received pre-surgery antibiotics fared better after their transplants than the patients who were healthier prior to their surgeries but did not receive antibiotics.

The researchers concluded that the antibiotics inhibited bacteria that causes inflammation, which in turn can lead to organ rejection. Specifically, they found that in both mice and humans, the treatment prior to a transplant reduced damage that could occur when blood flow is restored to the liver after a period of time without oxygen; and it reduced inflammation and cell damage while accelerating the removal of damaged cells. As a result, liver function was better than in the mice and human patients who did not receive antibiotics before a transplant.

Humans carry trillions of bacteria, many of which are essential for health — aiding in food digestion, for example. But other bacteria are linked to inflammatory bowel disease, cardiovascular disease, obesity, diabetes and even Parkinson's disease.

"So the idea behind this is to identify which bacteria is the good guy and which is the bad guy," said Dr. Jerzy Kupiec-Weglinski, the Paul I. Terasaki Professor of Surgery at the David Geffen School of Medicine at UCLA and the study's senior author.

The research is published in the peer-reviewed Journal of Clinical Investigation.

Studies in the past four years at the University of Chicago and University of Maryland have shown that in mice that received antibiotics before skin or heart transplants, those transplants lasted longer without rejection than in mice that did not receive antibiotics pre-surgery. From those studies, the UCLA researchers were able to zero in on some bacteria that appeared to help ensure more successful transplants.

In the mice that received antibiotics over the 10 days before transplants, the livers showed less damage — deterioration caused by dead cells, for example — than those in mice that were not given antibiotics before undergoing the same procedure.

"The livers in the mice that received antibiotics were protected against transplant damage, as well as rejection later on, because the antibiotics modulated their host microbiomes, which in turn stimulated cell protection," Kupiec-Weglinski said.

To further substantiate the effect of the antibiotics, the researchers then transplanted fecal matter from the untreated mice into those that had been given the medication. The mice that received the fecal transplants suffered inflammatory damage to their livers, despite the fact that they had been given antibiotics earlier in the experiment.

"That showed that antibiotic-mediated benefits clearly relate to the microbiota," Kupiec-Weglinski said.

The data on the UCLA patients covered 264 people who had received liver transplants — 156 who, because they were sicker before their surgeries received antibiotics for 10 or more days prior to the transplant, and 108 who were given antibiotics for less than 10 days, or not at all prior to surgery.

"To our total surprise, livers functioned better after transplantation in those patients who were very sick and required prolonged antibiotic therapy," Kupiec-Weglinski said.

The researchers then narrowed their focus to human patients who had been given one specific antibiotic, rifaximin, prior to the transplants. (To pull together a larger sample size, the team analyzed data for transplants for a longer period of time than the original set of UCLA patients, from January 2013 through July 2016.) They found that in patients that received rifaximin, which stays in the bowel and has a low risk for inducing bacterial resistance, early liver failure was significantly delayed or stopped.

Although the combination of data from human patients and mice demonstrates the benefits of extended pre-transplant antibiotic treatment, the researchers wrote in the journal that the results were gleaned over a short period of time — just 10 days or less after the transplants — and longer-term studies are needed to strengthen the findings.

Kupiec-Weglinski also said the study opens the door to further research that could determine which microorganisms protect liver function after transplants, and which bacteria need to be "turned down" to limit their negative effects.

The study was funded by the National Institutes of Health, the Terasaki Family Foundation and the Dumont–UCLA Research Foundation.