At 50, UCLA School of Dentistry celebrates the past while looking to the future 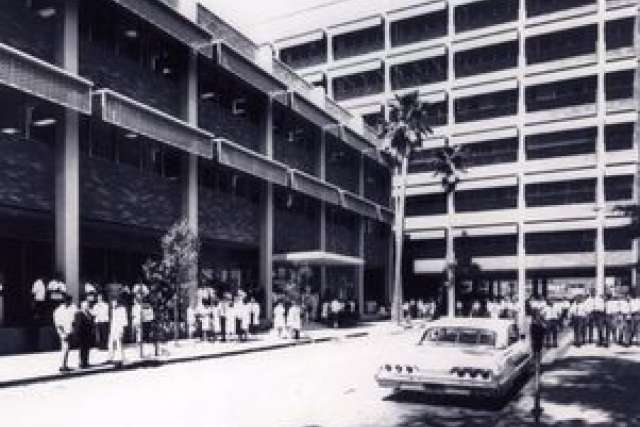 So with a sense of urgency, the regents embarked on an ambitious construction plan on the UCLA campus that led seven years later to the establishment of a dental school here. Today, 50 years later, the UCLA School of Dentistry is celebrating its five-decade rise to becoming one of the leading research-intensive dental schools in the nation.

Founded in 1964, the school continuously ranks as a top choice among dental school applicants and also serves as an affordable option for quality dental care in the Los Angeles region.

But there have been major changes over time. The makeup of today’s student body, for example, is drastically different from what it was in 1964. The first graduating class in 1968 had 28 dental students, with only one female student. However, during the early 1970s, a push to diversify the school’s student body took effect.

“An emphasis on encouraging women to look at dentistry as a profession was initiated by the administration, and their efforts eventually paid off,” said Dr. Carol Bibb, associate dean for student affairs and one of the first females at UCLA encouraged to pursue a dental degree. She graduated in 1978. In the early 1990s, DDS classes began shifting to a more equal number of men and women, and this has remained the trend today.

Over the years, the school’s patient-care capabilities have also transformed. In 1989, the school opened the Wilson-Jennings-Bloomfield UCLA Venice Dental Center, which was originally a small storefront with only five dental chairs.

“Today, the 27-chair clinic serves as the ‘dental home’ of choice for thousands of patient annually,” said Dr. Paulo Camargo, associate dean for clinical dental sciences. “Thanks to the generosity of the Wilson, Jennings and Bloomfield families, the UCLA Venice Dental Center is a regional destination for underserved communities in the West Los Angeles region.”

In 1994, the Northridge Earthquake forced the school to further improve its capacity to serve the community’s dental care needs. When seismic renovations began in 1997, school administrators seized the opportunity to modernize the Westwood clinics. After several years of refurbishment and upgrade, the UCLA Dental Clinics, which include a general clinic and 17 specialized clinics, were transformed into contemporary facilities with advanced technology and the foundation necessary to serve a growing patient population.

But the dental school’s growth spurt didn’t stop there. In the early- to mid-2000s, the school experienced a surge in research funding. In 2004, research grants awarded topped more than $10 million, a figure which has increased to a staggering $30 million today. The school’s research faculty have become known as pioneers in the field.

Breakthroughs have been made in the areas of salivary diagnostics, stem cell research, cancer research and antimicrobial technology to fight bacteria. In 2013, the UCLA dental school opened the Center for Oral/Head and Neck Oncology Research, a cutting-edge space housing the labs of some of the school’s world-renowned researchers.

To commemorate the school’s golden anniversary, a yearlong series of events and research symposiums is being planned that will start Saturday, May 17, with the Annual Alumni Event and end Saturday, May 16, 2015, with a gala event.

Then, on Sunday, June 1, in Royce Hall, 106 dental students will receive their DDS degrees. One of the dental school’s celebrated alumni, Dr. Gary Parker, who graduated in 1977, will give the commencement address. At the ceremony, he will also receive the coveted UCLA Medal from Chancellor Gene Block. The medal is UCLA’s highest honor given to an individual for extraordinary accomplishment. Among the past recipients have been Presidents Bill Clinton and Jimmy Carter, former U.S. Secretary of State Hillary Clinton, Los Angeles Mayor Tom Bradley and UCLA basketball coaching legend John Wooden. Dr. Parker is being honored for using his oral and maxillofacial expertise to surgically treat the disfigured in impoverished countries.

“This is a time for celebration, a time to reflect on everything that has been accomplished and to look forward to everything that will be accomplished.” said Dr. Ronald Mito, associate dean for academic programs and personnel. “This is an exciting place to be for everyone who has had a part in making the UCLA School of Dentistry what it is today.”

As the school looks towards the future, a push to recruit and retain leading dental educators is one of its major development goals. With eight endowed chairs — all created in the last 13 years — the school is already a leader in establishing this reliable, ongoing source of support to distinguished faculty.

“For any organization in today’s world, challenges will arise and change will occur. But if the past 50 years are any indication of what is to come, the next 50 years for the UCLA School of Dentistry will be nothing less than spectacular,” said Dr. No-Hee Park, dean of the school.