Better human rights protections around the world for people with disabilities, but gaps remain 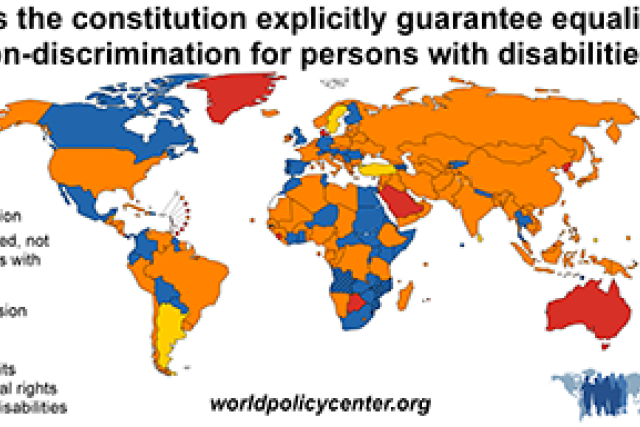 Only 27% of constitutions explicitly guarantee equality or nondiscrimination on the basis of disability.
June 11, 2019
Estimated read time: 2 minutes

The Convention on the Rights of Persons with Disabilities was one of the most quickly ratified human rights treaties in history. Globally, according to the United Nations, approximately 4 billion people are affected by disability policy, including 1 billion with disabilities, 1 billion who are aging and at high risk of developing a disability, and 2 billion close family members and caregivers.

But since the treaty was adopted in 2006, have countries taken steps to realize the promise of the CRPD and guarantee equal rights to all people with disabilities? That will be a key topic at this week's Conference of States Parties to the CRPD, which has become the largest and most diverse international disability meeting in the world.

At the UN on June 12, the UCLA Fielding School of Public Health's WORLD Policy Analysis Center will publish the first comprehensive look at laws governing rights to nondiscrimination, inclusion and reasonable accommodations at school and work for all 193 UN member states.

The report finds that although many countries have taken important steps to align national laws with the CRPD, others have not yet gone far enough in enacting legislative and constitutional protections in critical areas.