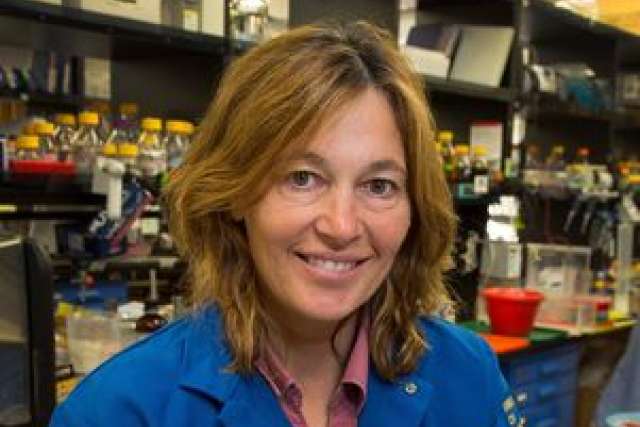 Led by Carla Koehler, a professor of chemistry and biochemistry in the UCLA College, the researchers identified a compound called dequalinium chloride, or DECA, that can prevent a metabolic enzyme from going to the wrong location within a cell. Ensuring that the enzyme — called alanine: glyoxylate aminotransferase, or AGT — goes to the proper “address” in the cell prevents PH1.

The findings were published online in the Proceedings of the National Academy of Sciences and will appear later in the journal’s print edition.

In humans, AGT is supposed to go to an organelle inside the cell called the peroxisome, but for people with a particular genetic mutation, the enzyme mistakenly goes instead to the mitochondria — tiny power generators in cells that burn food and produce most of the cells’ energy — which causes PH1.

Koehler’s team demonstrated that adding small amounts of DECA, which is FDA-approved, to cells in a Petri dish prevents AGT from going to the mitochondria and sends it to its proper destination, the peroxisome.

“In many mutations that cause diseases, the enzyme doesn’t work,” Koehler said. “In PH1 the enzyme does work, but it goes to the wrong part of the cell. We wanted to use DECA in a cell model to block AGT from going to the wrong address and send it back to the right address. DECA blocks the mitochondria ‘mailbox’ and takes it to the peroxisome address instead.”

How often did it work?

For people with the mutation, the correct peroxisome address is present in AGT, but it is ignored because it is accompanied by the address of the mitochondria, which the cell reads first, Koehler said.

Koehler, who also is a member of the scientific and medical advisory board of the United Mitochondrial Disease Foundation, hopes to find out whether a similar “correct address” strategy can slow cancer down. Her laboratory has identified approximately 100 other small molecules, which she calls MitoBloCKs, that she and her colleagues are testing for their ability to combat Parkinson’s, Alzheimer’s and other diseases.

PH1 — short for primary hyperoxaluria 1 — starts at birth and is usually fatal for patients who do not receive both kidney and liver transplants. Approximately half of those with the disease have kidney failure by age 15. Koehler has presented her findings to the Oxalosis and Hyperoxaluria Foundation, which provides support for PH1 patients and their families.

Scientists’ ability to diagnose rare diseases has improved in recent years because technological advances in genomics have made it easier to identify more genetic mutations, Koehler said.

According to Koehler, to treat diseases, scientists must first understand how proteins like AGT move inside the cell. Her research, which encompasses biochemistry, genetics and cell biology, studies how mitochondria are assembled and function, how proteins enter the mitochondria and reach the right location inside cells, and how mitochondria communicate with the rest of the cell.

Her laboratory uses model systems that enable them to study the biochemistry in a way that is not possible with humans. Much of the work is conducted in yeast.

“It’s exciting that our studies in baker’s yeast, a typical laboratory model, might be able to help kids with a complicated disease,” Koehler said.