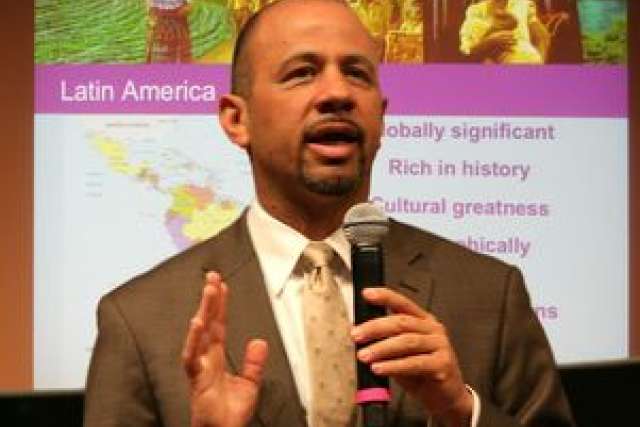 He spoke about an indigenous 16-year-old woman in rural Panama who just last year gave birth to a stillborn child, an outcome that could have been prevented if she had received treatment at a health clinic.

Regalia said it was "one of the thousands of deaths that happen every day in silence without witnesses, but with the same pain and affliction as (if we’re talking) about our daughters, wives and friends."

"Let’s not forget about their babies," he told the audience gathered to hear opening remarks at the conference organized by the UCLA Blum Center for Health and Poverty in Latin America.

The conference drew approximately 150 attendees, including health ministry and other government and community officials from 10 Latin American nations, on Tuesday and Wednesday to hear about health issues in the region as well as solutions.

Cindy Fan, UCLA vice provost for international studies, also spoke during the conference’s opening remarks, noting that the university has at least 150 faculty members in 28 academic fields that work on Latin American research. Units such as the Latin American Institute and the Blum Center are also focused on the region.

"The (Blum) Center seeks to anticipate policy changes and devise strategies to improve health and reduce poverty and address and combat inequities among disadvantaged populations and these are really important missions that a campus like UCLA is embracing," she added.

Regalia helps direct a high-profile initiative in Latin America aimed at improving maternal and children health. In 2010, Salud Mesoamérica 2015 Initiative was launched by the Bill and Melinda Gates Foundation, Carlos Slim Health Institute, the Spanish government, the Inter-American Development Bank and the governments of Central American countries and the state of Chiapas in southern Mexico.

Salud Mesoamérica is working to reduce health equity gaps faced by the poorest 20 percent of the region’s population with a focus on maternal and child health and nutrition.

"Regardless of the progress in the last few decades, there are still 70 million people living in poverty in the Mesoamerica region," Regalia said. "Mesoamerica is among the most inequitable regions in the world and maternal mortality ratios….are among the largest in the continent."

"Child malnutrition and anemia are very common, particularly in some countries, and believe it or not, complete vaccination remains a challenge for children under two years of age," he added."

The initiative is using a "results-based financing model" for improved quality of care and better health, Regalia said.

"The first step is agreeing with the countries which results need to be achieved within 18, 36 and 54 months," said Regalia, adding that initial results, which are the current focus, will emphasize health care delivery and the latter will hone in on outcomes.

Salud Mesoamérica finances half of the activities and governments finance the other half, he said. Once results are achieved, the countries will be reimbursed for 50 percent of their investment.

"Although the region is facing challenges to reach the poorest, things are changing faster in recent years and for the good," Regalia said.