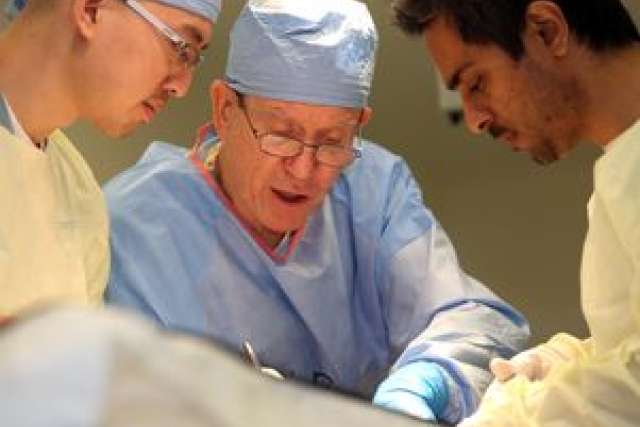 Under the glare of operating-room lights, six UCLA neurosurgery residents embarked on a rare adventure into the human body. As they started cutting into three bodies, Dr. Warwick Peacock, professor of surgery, encouraged them onward. “That should be the linea alba,” he said in his gentle South African accent. “There are some adhesions. Always stick your finger in to make sure you’re not cutting into the bowel. It spoils the day.”

Incisions made, the residents approached the spine from the front, sawing through the sternum, moving beyond the lungs and following the rib head to the pedicle, then removing a thoracic disc on each body — in two hours.

Completing a discectomy in two hours on a living patient would be extraordinary. But this was no OR. The bodies are cadavers, and the bitter and antiseptic scent of embalming fluid, not blood, fills the air. In UCLA’s Surgical Science Laboratory — one of the few of its kind dedicated to the training of surgical residents — the fledgling surgeons can practice and make mistakes. They bubble with excitement, viewing anatomy rarely seen in this era of minimally invasive surgery and computer modeling: lungs, the front of the spine, the aorta.

For Dr. Peacock, an emeritus pediatric neurosurgeon — who developed new techniques for treating children with cerebral palsy by first trying these techniques out on cadavers — teaching residents and exploring the human body on a daily basis has been “one of the most fascinating parts of my life. It is a novel experience every time.”

Engaging and passionate about his subject matter, Peacock is a born teacher. In 2013, he received the first Distinguished Service in Education Award from the David Geffen School of Medicine at UCLA. Colleagues called him a “master educator” and a “visionary,” who is “revolutionizing surgical-anatomy instruction.”

Called a "master educator" by his colleagues, Dr. Peacock has revolutionized the teaching of surgical anatomy, many say.

That enthusiasm, it turns out, is infectious among his students. “Dr. Peacock is an amazing teacher,” said Dr. Rich Everson, a neurosurgery resident. “He includes just the right amount of detail; it’s clinically oriented. He was a practicing neurosurgeon. There’s nobody better to teach us than someone like that.”

Medical students learn the basic structures of the human body, but a surgical resident must know how to reach his or her target without damaging anything along the way. Surgeons “are athletes of the small muscles,” Dr. Peacock said, and it takes hour upon hour of practice and repetition to train those muscles to perform the way they must.

At UCLA, they do that — and more — in the Surgical Science Laboratory, which opened in April 2012 under Peacock’s direction.

“I don’t think anyone has anything quite like what UCLA does and what Dr. Peacock does,” said noted pediatric and fetal surgeon Diana Farmer, chair of the Department of Surgery at UC Davis Medical Center. “It’s brilliant and it’s clever, and it wouldn’t surprise me if it becomes the standard throughout the country.”

But medical schools have generally been moving away from human dissection. Instead of dissecting bodies themselves, today’s medical students often learn anatomy in the first year of medical school from human cadavers that have already been dissected for anatomical demonstration. In years past, aspiring surgical residents had to pass an exam in surgical anatomy before they could begin learning their skills in an operating room. By contrast, new surgical residents starting in the OR today are likely to have to draw upon their vague memories of anatomy learned from observing already-dissected bodies years before in medical school.

Not so at UCLA. “The first reason for starting the Surgical Science Laboratory was to correct that deficit in anatomical knowledge,” Dr. Peacock said. “The second was to provide an opportunity for the residents to learn surgical skills and procedures on dead bodies rather than live ones. Apart from rare occasions, this was not happening.”

At UCLA, the opposite is true. Residents in nine of the 10 surgical specialties spend time in the Surgical Science Laboratory to learn anatomy and refine their surgical skills.

“The single most important experience that turns a layperson into a medical person is dissecting a human body, a dead body,” said Peacock. “You have to come to terms with death. When you have taken a human body apart and come to understand how it is constructed and how it functions, you become a very different person.”

Anatomy wasn’t always taught in a state-of-the-art facility on campus. For years, Dr. Peacock taught anatomy to UCLA surgical residents wherever he could find space. Needless to say, it was unwieldy. “We had to roll these bodies around all over the place. It was a blooming nightmare,” he recalled. In 2009, he approached Dr. Alan Robinson, then-executive associate dean of the medical school, about creating a dedicated lab.

“Would you like a surgeon who doesn’t know his anatomy to operate on you?” Peacock asked Robinson. “Oh, my God, no, this is a no-brainer,” Robinson responded.

Even with Robinson’s support, it took three years to establish the lab. “I was a real nuisance,” Peacock said, a twinkle in his eyes. “It does take a crazy person who has a bit of time to pester and push to get it done.”

Since the Surgical Science Laboratory opened in 2012, its use has expanded from only involving general surgery to including group sessions with more than a dozen disciplines, from orthopaedics to OB/GYN. In addition, Dr. Peacock works one-on-one with general-surgery residents in 20 two-hour sessions, dissecting the entire body. Others, including the neurosurgery residents, can ask for his personal guidance.

“To my knowledge, UCLA is the only place in the country that does that,” said Dr. Farmer.

As Dr. Peacock and a resident prepare to begin their lesson, they first solemnly thanked the body donor. In fact, everything that happens in the lab is done under the watchful eyes of representatives from UCLA’s Donated Body Program. “From the time that the body arrives at UCLA to its final disposition, we control where that body is at all times,” said Dean Fisher, director of the Donated Body Program. Throughout the procedures, there is utmost respect for the men and women who have willed their bodies to advance medical science. Each May, medical students and residents hold a memorial service with poetry and songs to honor the donors.

But while Dr. Peacock maintains a serious demeanor in the lab, the mood is not funereal. The lab gets noisy as residents call out for various instruments — an extensive and scrupulously maintained assemblage of retractors, Mayo scissors, clamps and Adson’s forceps. When a visitor expressed concern about possibly bothering the residents, Dr. Peacock responded, dryly, “You can’t bother a neurosurgeon.”

The goal at the lab is straightforward: to improve patient care. “If you know your anatomy, you’re going to be able to treat your patient a lot better than if you don’t know your anatomy, no question,” Peacock said. “When they finish their course with me, they know their anatomy.”

The numbers prove that. Before the lab opened, Dr. Peacock tested 40 general-surgery residents. Only two could correctly identify more than 80 percent of the body parts on a cadaver. When he repeated the test a year after the lab opened, not one resident failed, and two had perfect scores. Moreover, a survey taken several months after the lab opened found that residents had a positive reaction to the lab for learning procedures and boosting their confidence.

But besides functioning as a place to learn, the lab also provides a forum for experimentation. Dr. Avital Harari, an endocrine surgeon, for example, spent time in the lab to master a technique for removing the adrenals through the back instead of through the abdomen. In addition, UCLA’s face-transplant team rehearses there.

“The only shortcut needed in surgery is preparation, and Dr. Peacock’s lab allows us to do just that,” said Dr. Kodi Azari, chief of reconstructive transplantation. “The hand- and face-transplant programs would not exist without the ability to go through the procedures until the surgical team performs as a perfect symphony.”

This story was adapted from a story that appears in the summer 2014 issue of U Magazine. To read the entire story, go here.