Brains of people with schizophrenia are less reactive to social rewards like smiling faces, study shows 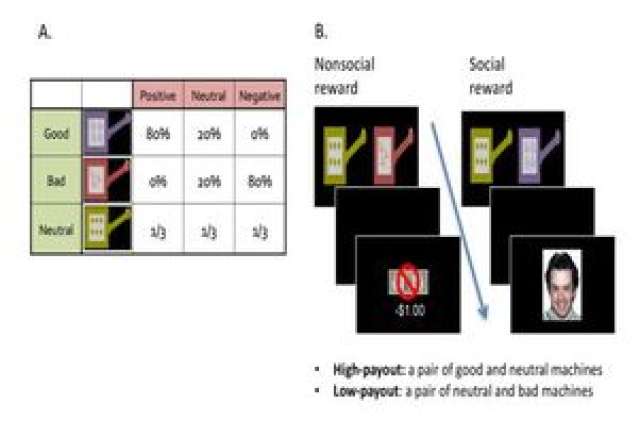 To study the brain's response to stimuli, researchers had participants play a computerized version of a slot machine, or “one-armed bandit.” The brains of individuals with schizophrenia were less reactive to social rewards.

People generally find social stimulation rewarding, which in turn motivates them to seek more social interactions. Conversely, in people with schizophrenia, abnormalities in how the brain processes social rewards likely contribute to human interaction problems. One of the hallmarks of schizophrenia is the impairment of social function, which includes the ability to conduct everyday conversations and maintain relationships with other people.

To study the brain's response to different stimuli, researchers recruited 27 people with clinically stable schizophrenia and 25 healthy individuals. They were asked to complete a task while in a functional magnetic resonance imaging, or fMRI, scanner. Functional MRI scans look at blood flow in the brain to detect areas of activity.

The task was to play a computerized version of a slot machine, or "one-armed bandit." There were two categories of payouts, images of dollar bills or of happy human faces. Researchers asked the participants to evaluate which machines had the best "payouts" in each category.

The findings provide additional evidence of disrupted social rewards processing in people with schizophrenia, researchers say. The next project is to perform the test in patients who have experienced their first psychotic episode to see how their reactions to social rewards change.

The study's first author is Junghee Lee, a research psychologist at UCLA; the senior author is Michael Green, a professor in residence in the department of psychiatry and biobehavioral sciences at the Semel Institute for Neuroscience and Human Behavior at the David Geffen School of Medicine at UCLA. The other authors are William Horan, Eric Reavis and Jonathan Wynn, all of UCLA and the VA Greater Los Angeles Healthcare System.

The study appears in the September 5 issue of the journal Schizophrenia Bulletin.

The National Institute of Mental Health and the Brain & Behavior Research Foundation supported this work.