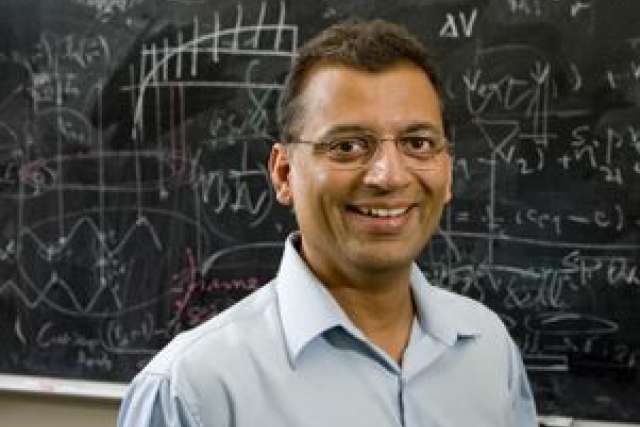 “The pattern of activity in a brain region involved in spatial learning in the virtual world is completely different than when it processes activity in the real world,” said Mayank Mehta, a UCLA professor of physics, neurology and neurobiology in the UCLA College and the study’s senior author. “Since so many people are using virtual reality, it is important to understand why there are such big differences.”

The study was published today in the journal Nature Neuroscience.

The scientists were studying the hippocampus, a region of the brain involved in diseases such as Alzheimer’s, stroke, depression, schizophrenia, epilepsy and post-traumatic stress disorder. The hippocampus also plays an important role in forming new memories and creating mental maps of space. For example, when a person explores a room, hippocampal neurons become selectively active, providing a “cognitive map” of the environment.

The mechanisms by which the brain makes those cognitive maps remains a mystery, but neuroscientists have surmised that the hippocampus computes distances between the subject and surrounding landmarks, such as buildings and mountains. But in a real maze, other cues, such as smells and sounds, can also help the brain determine spaces and distances.

To test whether the hippocampus could actually form spatial maps using only visual landmarks, Mehta’s team devised a noninvasive virtual reality environment and studied how the hippocampal neurons in the brains of rats reacted in the virtual world without the ability to use smells and sounds as cues.

Researchers placed a small harness around rats and put them on a treadmill surrounded by a “virtual world” on large video screens — a virtual environment they describe as even more immersive than IMAX — in an otherwise dark, quiet room. The scientists measured the rats’ behavior and the activity of hundreds of neurons in their hippocampi, said UCLA graduate student Lavanya Acharya, a lead author on the research.

The researchers also measured the rats’ behavior and neural activity when they walked in a real room designed to look exactly like the virtual reality room.

The scientists were surprised to find that the results from the virtual and real environments were entirely different. In the virtual world, the rats’ hippocampal neurons seemed to fire completely randomly, as if the neurons had no idea where the rat was — even though the rats seemed to behave perfectly normally in the real and virtual worlds.

“The ‘map’ disappeared completely,” said Mehta, director of a W.M. Keck Foundation Neurophysics center and a member of UCLA’s Brain Research Institute. “Nobody expected this. The neuron activity was a random function of the rat’s position in the virtual world.”

Explained Zahra Aghajan, a UCLA graduate student and another of the study’s lead authors: “In fact, careful mathematical analysis showed that neurons in the virtual world were calculating the amount of distance the rat had walked, regardless of where he was in the virtual space.”

They also were shocked to find that although the rats’ hippocampal neurons were highly active in the real-world environment, more than half of those neurons shut down in the virtual space.

The virtual world used in the study was very similar to virtual reality environments used by humans, and neurons in a rat’s brain would be very hard to distinguish from neurons in the human brain, Mehta said.

In addition to analyzing the activity of individual neurons, Mehta’s team studied larger groups of the brain cells. Previous research, including studies by his group, have revealed that groups of neurons create a complex pattern using brain rhythms.

“These complex rhythms are crucial for learning and memory, but we can’t hear or feel these rhythms in our brain. They are hidden under the hood from us,” Mehta said. “The complex pattern they make defies human imagination. The neurons in this memory-making region talk to each other using two entirely different languages at the same time. One of those languages is based on rhythm; the other is based on intensity.”

Every neuron in the hippocampus speaks the two languages simultaneously, Mehta said, comparing the phenomenon to the multiple concurrent melodies of a Bach fugue.

When people walk or try to remember something, the activity in the hippocampus becomes very rhythmic and these complex, rhythmic patterns appear, Mehta said. Those rhythms facilitate the formation of memories and our ability to recall them. Mehta hypothesizes that in some people with learning and memory disorders, these rhythms are impaired.

“Neurons involved in memory interact with other parts of the hippocampus like an orchestra,” Mehta said. “It’s not enough for every violinist and every trumpet player to play their music flawlessly. They also have to be perfectly synchronized.”

Mehta believes that by retuning and synchronizing these rhythms, doctors will be able to repair damaged memory, but said doing so remains a huge challenge.

“The need to repair memories is enormous,” noted Mehta, who said neurons and synapses — the connections between neurons — are amazingly complex machines.

Previous research by Mehta showed that the hippocampal circuit rapidly evolves with learning and that brain rhythms are crucial for this process. Mehta conducts his research with rats because analyzing complex brain circuits and neural activity with high precision currently is not possible in humans.

Other co-authors of the study were Jason Moore, a UCLA graduate student; Cliff Vuong, a research assistant who conducted the research as a UCLA undergraduate; and UCLA postdoctoral scholar Jesse Cushman. The research was funded by the W.M. Keck Foundation and the National Institutes of Health.