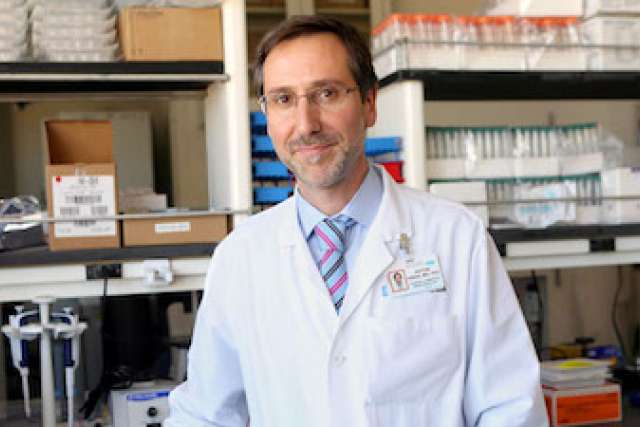 Pembrolizumab, an immunotherapy drug that was co-developed by UCLA cancer researcher Dr. Antoni Ribas, has been approved by the U.S. Food & Drug Administration as first-line treatment for metastatic melanoma. The first-line designation means that patients will have greater access to the drug without first having to receive other treatments.

Ribas is a member of the UCLA Jonsson Comprehensive Cancer and a UCLA professor of hematology and oncology.

Pembrolizumab, which is marketed under the brand name Keytruda, works by turning on the immune system's brakes, keeping its T cells from recognizing and attacking cancer cells.

It originally received accelerated approval by the FDA in 2014 as a treatment for metastatic melanoma. Until recently, however, the drug was only given to patients who were no longer responding to ipilimumab, the current standard first-line therapy. The latest approval was based on the results of a recent study by Ribas and a team of researchers from 16 countries, which was published in the New England Journal of Medicine.

"We are delighted that pembrolizumab was found to be superior to ipilimumab as first-line therapy by improving responses and survival," Ribas said. "This approval by the U.S. Food and Drug Administration will allow physicians to prescribe this drug to patients who they believe will greatly benefit from this treatment."

After six months, 45 percent of those taking pembrolizumab responded to therapy, compared with 26 percent for ipilimumab.