Broccoli may help protect against respiratory conditions like asthma 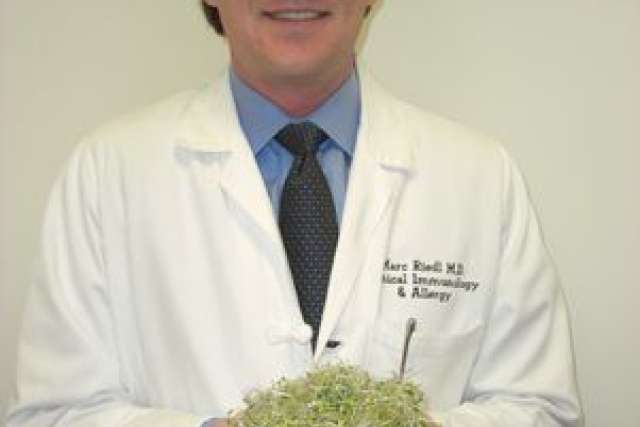 Published in the March edition of the journal Clinical Immunology, the research shows that sulforaphane, a chemical in broccoli, triggers an increase of antioxidant enzymes in the human airway that offers protection against the onslaught of free radicals that we breathe in every day in polluted air, pollen, diesel exhaust and tobacco smoke. A supercharged form of oxygen, free radicals can cause oxidative tissue damage, which leads to inflammation and respiratory conditions like asthma.

"This is one of the first studies showing that broccoli sprouts — a readily available food source — offered potent biologic effects in stimulating an antioxidant response in humans," said Dr. Marc Riedl, the study's principal investigator and an assistant professor of clinical immunology and allergy at the David Geffen School of Medicine at UCLA.

"We found a two- to three-fold increase in antioxidant enzymes in the nasal airway cells of study participants who had eaten a preparation of broccoli sprouts," Riedl said. "This strategy may offer protection against inflammatory processes and could lead to potential treatments for a variety of respiratory conditions."

The UCLA team worked with 65 volunteers who were given varying oral doses of either broccoli or alfalfa sprout preparations for three days. Broccoli sprouts are the richest natural source of sulforaphane; the alfalfa sprouts, which do not contain the compound, served as a placebo.

"A major advantage of sulforaphane is that it appears to increase a broad array of antioxidant enzymes, which may help the compound's effectiveness in blocking the harmful effects of air pollution," Riedl said.

According to the authors, no serious side effects occurred in study participants receiving broccoli sprouts, demonstrating that this may be an effective, safe antioxidant strategy to help reduce the inflammatory impact of free radicals.

Riedl notes that more research needs to be done to examine the benefits of sulforaphane for specific respiratory conditions. It is too early to recommend a particular dosage.

Riedl recommends including broccoli and other cruciferous vegetables as part of a healthy diet.

Other study authors include Dr. Andrew Saxon of the Hart and Louis Lyon Laboratory, division of clinical immunology and allergy in the department of medicine at the David Geffen School of Medicine at UCLA, and Dr. David Diaz-Sanchez of the human studies division of the U.S. Environmental Protection Agency.