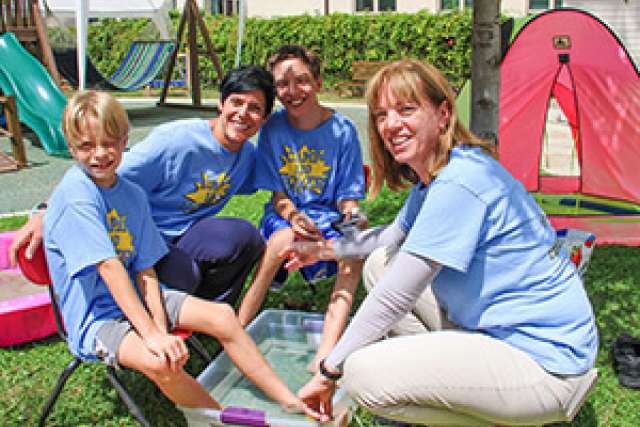 Camper Niko Corzo (left) takes a break from a water activity. With him are physical therapist Carolyn Kelley, junior camp counselor Oliver Mann and physical therapist Loretta Staudt. The therapists developed many of the activities at Camp Leg Power.

Each day, the kids at Camp Leg Power start their day with a spirited group chant, followed by an energetic UCLA fight song.

The chant, which is done with corresponding hand and leg motions, is actually a therapeutic activity in disguise, the first in a three-hour session that converts therapy for children with movement disorders into summertime fun. Camp Leg Power is a program of the Center for Cerebral Palsy at UCLA that’s staffed by physical therapists and student volunteers.

On Wednesday, Oliver Mann, who has received therapeutic services through the interdisciplinary center since he was a toddler, leads the opening exercise for campers. Now 16, Oliver is a junior counselor at the camp and an unofficial cheerleader for the younger campers, including Niko Corzo, an active 9-year-old from Cheviot Hills.

Niko plays a video game using his ankle to move the cursor.

“Most kids with cerebral palsy have individual physical therapy sessions during the year, and they can get tedious,” said physical therapist Eileen Fowler. “Having a summer program that lets campers participate in creative therapeutic activities with their peers builds skills and confidence. And we make sure it really is fun.”

Niko has no doubts about that. “All of the camp activities are fun, but the day we played with shaving cream with our feet was epic.”

But Camp Leg Power is even more than just plain fun and physical therapy. The “camp” is actually a pilot study designed to identify changes in the brain in  response to therapy for the lower limbs of children with spastic cerebral palsy. All 20 children participating in the UCLA study have impairment in voluntary movement caused by damage to specific motor tracts in the brain. The research focuses on measuring and improving skilled movement patterns and identifying resulting changes in the brain.

The UCLA project is a collaborative effort of the Center for Cerebral Palsy in the department of orthopaedic surgery, the UCLA Brain Mapping Institute, the department of pediatrics and the Tarjan Center. It is one of the first studies examining the before-and-after effects of intense lower-extremity physical therapy and the corresponding changes in brain activity measured in MRI scans.

Unbeknown to the youngsters, the camp activities were specifically developed to focus on isolated leg and foot movements that may enhance neuronal activity in the brain — and even muscle function.

Niko’s favorite activity, for example, is an interactive video game designed to improve ankle motion; instead of using hand-held controls, he operates the games using a specially designed device that allows him to move the cursor on the screen by rotating his ankle.

“I don’t think he even realizes that this is therapy, which, of course, is the whole point,” said his mentor Oliver, who also plays these video games controlled by his ankles.

Campers also play modified sports, participate in dance activities, tackle obstacle courses, and explore sensory materials, such as sand, water, paint and rubber water toys, with their feet and toes.  And, like any other camp, there are arts and crafts, singing and general horsing around. Each week has a specific theme such as sports, entertainment or travel so that different movements and variations can be woven into the four-week program.

The Center for Cerebral Palsy at UCLA is an interdisciplinary program that provides medical care to children and adults with cerebral palsy.  Faculty and staff, which include orthopedists, physical therapists, neurologists, biomedical engineers and scientists, are involved in dozens of research and educational projects that improve the lives of people with cerebral palsy.

But for the moment, the center is not on the minds of the kids at Camp Leg Power. For now, it’s song time, and the campers are happily belting out their favorite pop songs while Oliver accompanies them on his ukulele.