Can you hear me now? How the inner ear's sensors are made 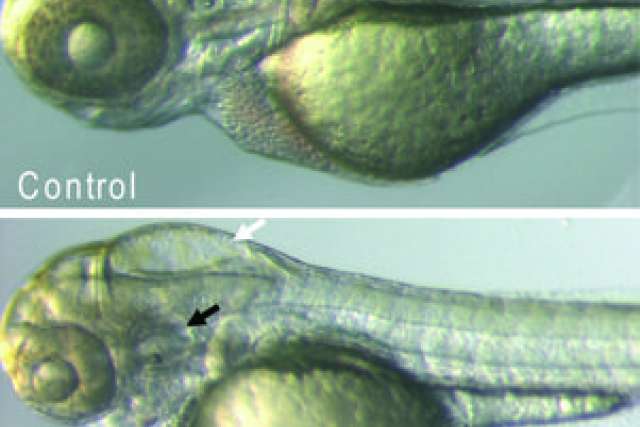 (Editors: Images of normal and abnormal ear sensors in zebrafish are available upon request.)

Located at the ends of cilia — tiny cellular hairs in the ear that move and transmit signals — these crystals play an important role in detecting sound, maintaining balance and regulating movement.

Dislodged ear crystals are to blame for the most common form of vertigo. Known as benign paroxysmal positional vertigo, the disorder plagues up to 10 percent of people older than 60 and causes 20 percent of patients' dizziness complaints.

The researchers' findings, published Nov. 30 in the advance online edition of the journal Nature, suggest a potential gene target for the treatment of people suffering from common hearing and balance problems related to cilia disorders.

"People have known for a long time about the importance of cilia for propelling sperm up the uterus and moving mucus out of the lungs," said Kent Hill, associate professor of microbiology, immunology and molecular genetics at the David Geffen School of Medicine at UCLA and the UCLA College of Letters and Science. "Our study illustrates that cilia perform many additional jobs that are essential to how our bodies develop and work."

Hill's team employed high-speed, high-definition video imaging to watch cilia moving in real-time inside the developing ears of embryonic zebrafish. These small, bony fish undergo stages of development similar to humans and other vertebrates, making them useful models for research.

The researchers labeled cilia in the fish with fluorescent probes and used video microscopy to visualize the cilia and other inner ear structures. In the control group of fish, long cilia beat like tiny oars, causing tiny particles to circle in a vortex around them. The tornado of whirling particles accumulated at the proper location to form the inner ear's crystalline sensors.

"We next blocked expression of a gene that controls dynein — a tiny molecular motor that drives cilia movement," said Hill. "When we examined the embryos, we saw that cilia movement came to a halt. As a result, the particles did not assemble in the correct site. So not only did ear crystals form in the wrong place, but they were misshapen and abnormally sized."

According to Hill, the findings offer promise for the treatment of patients with hearing disorders and people with ciliopathies, disorders marked by poor cilia function. These conditions include sperm-related infertility, polycystic kidney disease, lung and respiratory disorders, swelling of the brain, and reversal of the internal organs' sites from one side of the body to the other.

"The idea that physical movement can influence vertebrate development is very provocative," Hill said. "Scientists typically look at whether a particular gene is switched on or off, or if a particular protein is activated that determines if a tissue develops normally. In this case, microscopic currents in the fluid surrounding developing tissue are affecting its development. We need to understand more details of this process and determine how common it is during development."

The study was supported by grants from the National Institutes of Health, the National Science Foundation, the Human Frontier Science Program and the Arnold and Mabel Beckman Foundation.

UCLA is California's largest university, with an enrollment of nearly 38,000 undergraduate and graduate students. The UCLA College of Letters and Science and the university's 11 professional schools feature renowned faculty and offer more than 323 degree programs and majors. UCLA is a national and international leader in the breadth and quality of its academic, research, health care, cultural, continuing education and athletic programs. Four alumni and five faculty have been awarded the Nobel Prize. For more news, visit the UCLA Newsroom.