But the effects can be mitigated in utero, according to UCLA study of National Archives records 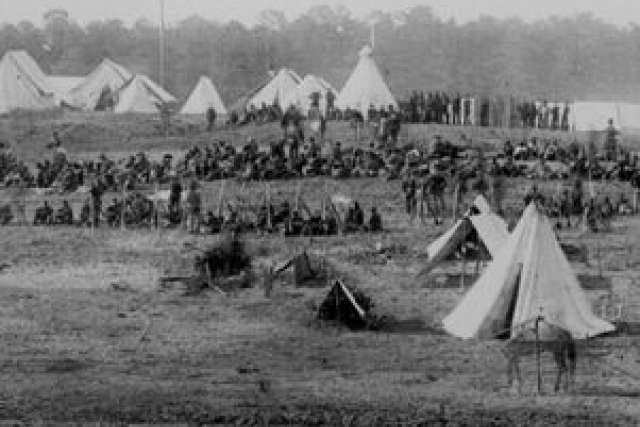 A UCLA study using Civil War-era data suggests that trauma suffered by a father can affect the lifespan of his child, but that the phenomenon can be neutralized before the child is even born — by the nutrients a mother takes in during pregnancy.

Dora Costa, a UCLA professor of economics, analyzed records housed in the National Archives tracking the lifespans of sons of Union soldiers who were captured and held by the Confederacy as prisoners of war and who lived to be at least 45 years old.

Although the data dated back to the mid-19th century, the findings could have important implications for human health today, Costa said. The notion that trauma passed through the father could be mitigated by the physical well-being of the mother could signal that there are ways to counter such trauma.

"There is an awful lot of research about what happens to the mother when a child is in utero, but there's been very little looking at the father's contribution," Costa said. "One of the nice things about this paper is that it shows, yes, both the father and the mother do matter."

The study compared those children with children of Union soldiers who survived the war but were never POWs. Costa's work was published in the journal Proceedings of National Academy of Sciences and funded by the National Institutes of Health.

"I originally thought the key factor in the children's longevity would be socioeconomic status," Costa said. "But then I started to notice the effect was only happening in the sons — which is in keeping with an epigenetic cause — and only to the sons born after the war."

Epigenetics is the study of inherited biological triggers that affect genes and how cells in the body react to genetic information, but that do not alter underlying DNA sequences.

"We can control for various socioeconomic factors like wealth, quality and longevity of marriage and such and the effect is still there," Costa said. "So the findings seem to be most consistent with the effect of epigenetics related to this period of starvation for these men."

Common causes of death among the veterans' sons were cancer and cerebral hemorrhage, which is in keeping with epigenetic studies of starvation in male mice. And fathers' POW status had no impact on their daughters' health.

The research made distinctions based on when the POWs were detained by the Confederate army, because in general prison camp conditions worsened toward the end of the conflict. In the early years of the war, prisoner exchanges between the two sides were frequent, but from 1864 to 1865, terms of exchange became contentious, camps were frequently overcrowded, and scurvy and malnutrition were more common than they were earlier in the war.

One of the most interesting findings was that sons born during the later months of the year to men who were POWs during the decline in conditions of Confederate camps fared better than sons who were born earlier in the year. Costa said that's most likely because the mothers of the later time of year births had better access to nutrition during their pregnancies.

Among sons born in the fourth quarter to mothers with adequate nutrition during their pregnancies, there was no difference in the eventual death rates between sons of POWs and sons of non-POWS. In contrast, among sons born in the second quarter, when maternal nutrition was inadequate, the sons of ex-POWs who experienced severe hardship during captivity were 1.2 times more likely to die than the sons of ex-POWs who fared better in captivity and non-POWs.

Costa was able to track the lives and lifespans of the veterans and their wives and children because the families of Civil War veterans and POWs were eligible for generous pensions, and the government kept extensive, detailed, handwritten records. Those records have been in the process of being converted to digital archives for the past 20 years.

She hopes that the study highlights the need for more examination of the role fathers play on the genetic well-being of their offspring — even when the offspring are still in utero — and she plans to study whether the pattern holds true for grandchildren.

"I don't think this one study means that we should be looking for epigenetics as an answer everywhere," Costa said. "But one of the lessons here I think is that what happens to fathers does matter."

Costa said there are benefits to working with subjects from the past: Privacy issues are not an issue, and it's easier to assess the external stressors people faced — stressors that could not readily be duplicated on people in a current study.