Comedian, actress use laughter to enlist millennials in the fight against Alzheimer's 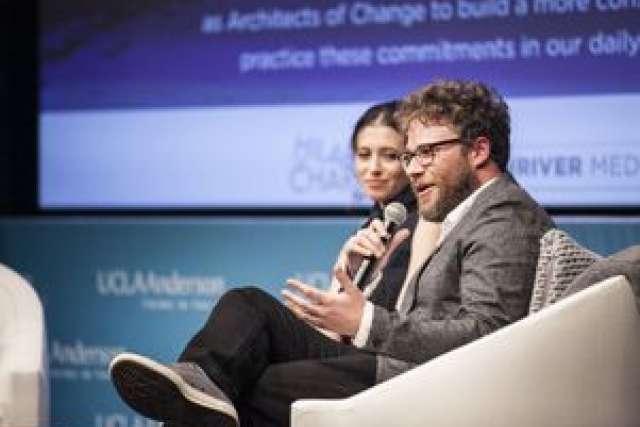 Alzheimer’s disease can actually bring about a greater capacity for understanding.

That's what Lauren Rogen discovered after her mother was diagnosed with early-onset Alzheimer’s before the age of 60.

The news of her mother’s condition left her dumbfounded. “I was 25 when my mom was diagnosed. Nobody my age was going through it; nobody was talking about it,” she recounted.

“But people started contacting us. And I was, like, ‘Oh! I am not alone.’ There are so many people out there who want a voice, who want to share their story, who want to take action. We became very lucky — there was an organic growth that happened because there was a need for it.”

Rogen and her actor/comedian husband, Seth, recently brought their collective wisdom about the disease and some achingly funny moments to UCLA Anderson as part of Anderson’s Impact Speaker Series. Joining them on stage was former California first lady Maria Shriver, a journalist and an advocate for people with Alzheimer’s. The event was also part of Shriver Media’s Architects of Change Conversation Series.

Journalist and former California first lady Maria Shriver, an advocate for the fight against Alzheimer's, shares a light moment with Lauren and Seth Rogen.

“I didn’t realize there was no treatment, in any shape or form,” Seth Rogen said. “That was surprising to me. It’s also the most expensive disease in America — to people and to the government. And that’s what surprised me the most — that America would allow their most expensive disease to go completely unchecked. We have something that’s costing us money and have no way to stop it.”

The Rogens and Shriver have learned that getting more and more people to talk about it — and laugh in its wake — is the best treatment.

“Sometimes a thing is just so sad you have to laugh,” said Lauren, an actress and screenwriter. “There are many beautiful sad stories and events that are classy and sincere, but we wanted to break up that space a little bit and be louder, a little bit raunchy, and really make some noise and get attention. If you’re focusing on millennials, you have to step outside the box a bit.”

So the Rogens started Hilarity for Charity, hosting celebrity fundraising events and producing some hysterical videos to spread the message about Alzheimer’s and engage the next generation of advocates as well as to try to get the federal government to put more funding into finding a cure.

“We had Miley Cyrus do it this year,” said the comedian of the organization’s annual variety show. “Bruno Mars performed the first year; I think he had some community service he was working off,” he joked. “I’m praying Kanye gets arrested; it would be great to have him.”

Apart from events and videos, the organization is also bringing the fundraising and awareness to universities, and not just in the form of speaking engagements.

“These students come together and form their own groups, and we give them online fundraising tools,” Lauren said of their college awareness campaign. “They sell cookies late-night to different fraternities and dorm rooms, they do car washes, they pick up trash.”

The funds go to a more practical, functional part of the nonprofit. “We have given away over 24,000 hours of care a year,” Lauren said.

“In-home care is the only thing that makes the situation livable, really,” Seth added. “I get to see the firsthand proof that we’ve helped people.”

“One of the things we created, which I’m very proud of, is an online support group that takes place in multiple time zones every other week,” Lauren said. A regular support group can be so hard to access. But support systems can’t be the only treatment surrounding the disease forever.

“By 2050, there will be 15 million people with Alzheimer’s,” she said. “Those are some really scary numbers, especially when you consider the amount of care that is needed to treat someone with this disease.”

This fact begs the answer to the question: Why are the Rogens and Maria Shriver talking Alzheimer’s at a business school?

“Business is the place that can now solve the world’s problems,” Shriver said. “When I was growing up, politics was the place that people went if they wanted to change the world. I think what’s interesting about speaking here is you’re all in business school getting graduate degrees, and [learning] how to use those degrees to think about cures, to start companies that can change the way we live.”

This story was edited from one posted on the Anderson School website.