Concussions and kids: Project co-led by UCLA gets $10 million grant from NIH 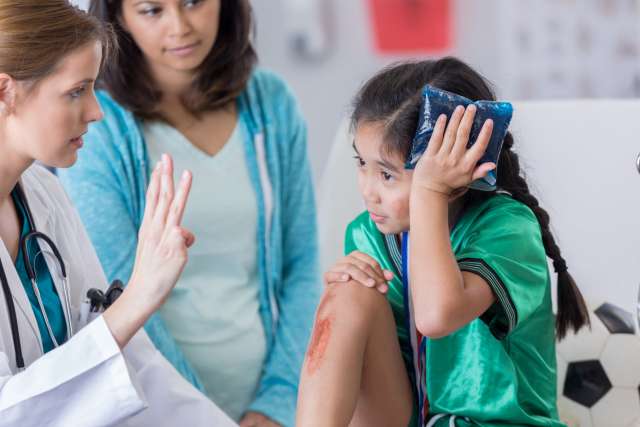 Nearly a third of people who suffer concussions have symptoms that persist for months, and adolescents are at even higher risk of delayed recovery, researchers say.

A research project co-led by the UCLA Steve Tisch BrainSPORT Program aimed at improving the assessment and treatment of concussions in school-aged children has been awarded $10 million by the National Institute of Neurological Disorders and Stroke, part of the National Institutes of Health.

The grant to the Four Corners Youth Consortium, a group of academic medical centers studying pediatric concussions, will support Concussion Assessment, Research and Education for Kids, or CARE4Kids, a multisite study that will enroll more than 1,300 children and teens nationwide, including an estimated 240 in Southern California.

CARE4Kids researchers will use advanced brain imaging and blood tests to explore biological markers — including those related to changes in blood pressure, heart rate and pupil reactivity — that could predict which youngsters will develop persistent symptoms after a concussion.

Nearly one-third of the 3 million Americans diagnosed annually with concussions have symptoms that persist for three months after their injury, including chronic migraines, learning and memory problems, exercise intolerance, sleep disturbances, anxiety and depression.

And the risk of delayed recovery is even higher for adolescents, according to UCLA’s Dr. Christopher Giza, co-lead of the CARE4Kids project and director of the BrainSPORT Program.

“We are excited to launch this innovative investigation into concussions, which remain a serious public health concern for our nation’s youth and their families,” said Giza, a professor of neurosurgery and pediatrics at UCLA’s David Geffen School of Medicine and Mattel Children’s Hospital. “Using objective tests to accurately predict recovery can lead to earlier, more effective interventions and serve as a foundation for innovative new treatments.”

The study, which focuses on children between the ages of 11 and 18, will unfold in two phases. The first part will evaluate children with concussions to identify a set of biomarkers predictive of persistent post-concussion symptoms. The next will seek to confirm that these biomarkers accurately predict prolonged symptoms in a second group of children diagnosed with concussions.

The goal is to develop a practical algorithm for use in general clinical practice for doctors and other health professionals caring for these youth, Giza said.

Along with Giza, the project will be led by Dr. Frederick Rivara at Seattle Children’s and the University of Washington and Gerard Gioia at Children’s National in Washington, D.C.

Dr. Meeryo Choe, an assistant clinical professor of pediatric neurology at UCLA Mattel Children’s Hospital, will oversee the portion of the study at UCLA.

“This multicenter study will enhance our understanding of what causes some children to suffer prolonged concussion symptoms,” she said. “By identifying markers for delayed recovery, our work will pave the way for new treatments to improve clinical outcomes.”

Earlier research that led to the CARE4Kids project was funded by private donations from Stan and Patti Silver, the UCLA Steve Tisch BrainSPORT Program and the UCLA Easton Clinic for Brain Health, as well as by a donation from the Satterberg Foundation to the Seattle Children’s Research Institute and an investment from the Sports Institute at University of Washington Medicine.