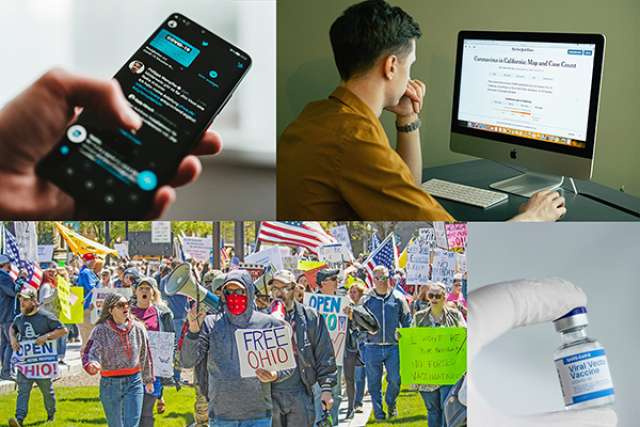 UCLA researchers found that people's attitudes and beliefs about the pandemic were influenced by the news media they consumed.
June 30, 2021
Estimated read time: 4 minutes

Researchers studying the intersection of politics and psychology have long documented a link between threat sensitivity and social conservatism: People who are more socially conservative tend to react more strongly to threats. Conversely, those who are more socially liberal tend to be less sensitive to threats, viewing the world as a generally safe place and embracing change to explore new possibilities.

These findings have held across a variety of events, but during the pandemic, U.S. polls show that Democrats, who tend to be more liberal, have generally been more concerned about the COVID-19 threat than Republicans, who tend to be more conservative. A new UCLA study explores this reversal, probing the relationship between innate dispositions toward threats, the social environment and responses to the pandemic.

Led by UCLA graduate student Theodore Samore, anthropology professor Daniel Fessler and postdoctoral scholar Adam Sparks, along with cognitive scientist Colin Holbrook from UC Merced, the study found that Republicans' and independents' inclinations to embrace protective behaviors in proportion to their degree of conservatism were overruled by distrust in science and in liberal or moderate information sources. Republicans and independents also focused on the negative economic impacts of the lockdowns and the perceived infringement upon personal liberties. Together, these factors led socially conservative Republicans and independents to take fewer precautionary measures, such as mask-wearing, physical distancing and sanitizing.

"The distrust of science and public health officials, as well as distrust of moderate and liberal media sources, actually countermanded responses that reflected people's underlying personality traits," Fessler said. "For example, we can think about how behaviors among Republicans and independents may have been different if evangelical church pastors had promoted mask-wearing to protect the elderly and most vulnerable. Instead, conservative Republicans and independents were influenced by high-profile individuals who downplayed the severity of the virus and undermined reliable information sources."

"There's been a broad tendency to see partisan responses to the pandemic as existing along a simple left-right axis, where more liberal Americans have exhibited greater precautions than more conservative ones," Samore said. "However, we find that more socially conservative Democrats were taking greater COVID-19 precautions than more liberal ones, suggesting that these political dynamics are in fact more complex than is commonly presumed."

As Holbrook explained, "The data show that conservatives who trusted scientific authorities and media reporting that advised precaution actually took greater COVID-19 safety measures than progressives did, and these patterns are not explained by factors such as differences in age or employment."

The research raises disturbing implications. "The findings suggest that Republicans would have been substantially more careful had their media environment encouraged them to do so, plausibly saving many thousands of lives and preventing scores of long-term health problems related to COVID infection," Holbrook said.

The investigators note that today's media environment is a key factor in how people understand and respond to major events.

"As we flatten the information highway, giving everyone a voice on social media, we undermine or lose the authority of professional journalists and scientists," Fessler said. "There is great potential for misinformation about science to be disseminated, and for people to actually act against their gut instincts or self-interest."

The investigators ran two studies, using identical methods, six weeks apart to ensure results would not reflect a specific time period’s social and political landscape. For each study, 1,000 paid participants were recruited through an online crowdsourcing platform. Survey questions asked about political party affiliation; hot-button political issues, such as abortion, tax rates and military intervention abroad; and attitudes toward social change more broadly. Other questions assessed participants' views on science and attitudes toward a variety of media sources, individual journalists, and prominent politicians and scientists. Participants also reported the extent to which they followed various COVID-19 protocols, such as hand-washing, physical distancing and mask-wearing.

"As the success of the ongoing U.S. vaccination campaign demonstrates, when people of diverse political orientations are able to unite in the face of danger, everyone benefits," he said. "Understanding how individuals differ in their reactions to threats, and how this interacts with their political leanings and information consumption, may provide a vital link to understanding and addressing shared challenges in our increasingly interconnected world."