Crash survivor meets blood donors who helped save his life 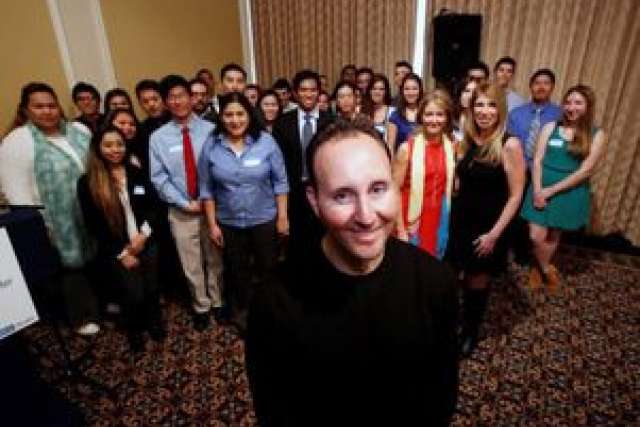 Due to confidentiality laws, most blood donors and recipients never meet. But on Friday, a rare event organized by the UCLA Blood and Platelet Center brought together a man who survived a horrific motorcycle crash with some of the 196 blood donors who helped save his life.

“Donating blood is one of the most selfless and gracious gifts you could ever give anyone,” Internet executive Brandon Levine told a packed room of blood donors and news reporters at the UCLA Faculty Center. “A part of you is inside me. I have no way to repay you, except to say thank you so much for my life.”

Levine, 40, has no memory of the accident that happened on his first solo ride last April. The force hurled him chest-first into a guardrail, severing his aorta and vena cava, the primary vein that transports blood to the heart.

Anesthesiologist Dr. Barbara Van de Wiele heard Levine’s plea for help before he went into surgery with a 5 percent chance of survival.

Levine arrived by ambulance at Ronald Reagan UCLA Medical Center bleeding from multiple wounds, including internally. He had shattered his jaw, eye socket, arm and hip; damaged his kidneys, lungs and liver; and knocked out his teeth. To reconstruct his face, doctors had to use 140 plates.

As the ER team rushed Levine into the OR for emergency heart surgery, he grabbed the arm of anesthesiologist Dr. Barbara Van de Wiele. “Please help me,” he pleaded.

“I heard those three words in my head for the next eight hours as we transfused 100 units of blood into his veins and struggled to save his life,” recalled Van de Wiele. “Brandon would not be here but for the generosity of those who hear the ‘Please help me’ of strangers in desperate need of precious blood.”

She thanked his donors for saving “a wonderful person who survived the unsurvivable.”

In total, Levine was transfused with 207 units of blood, plasma and platelets — about 20 times the average person’s blood volume. During his first night in the hospital, his heart stopped twice, forcing nurses to resuscitate him. Doctors gave him only a 5 percent chance of survival.

He was hospitalized for two months — the first in a coma — in the intensive-care unit at Reagan UCLA Medical Center. Three grueling weeks of daily physical therapy followed in UCLA’s inpatient neurological rehabilitation unit, which Levine joked, was “like boot camp for handicapped people.”

Despite losing 50 pounds of muscle, enduring more than 10 surgeries and having to relearn how to swallow, sit up, walk and run, Levine’s will to recapture his life never flagged. Judging from his comments, neither did his sense of humor.

“When I first saw my legs, I started to cry, because they looked like toothpicks,” he remembered. “But the great thing about losing 50 pounds is you get to put it back on. I ate nonstop, and calories didn’t count. It was like living in heaven.”

Levine was accompanied by his girlfriend, Leah Horwitz, whom he started dating nine months before the crash, and his mother, Betsy Sachs, who flew in from his hometown of Baltimore, Maryland. Neither left his side during the first three months of his recovery.

Ranging in age from mid-teens to mid-70s, Levine’s donors hailed from throughout the Los Angeles region and spanned the spectrum demographically. Many had given platelets and blood dozens of times, with one man donating platelets on 194 separate occasions.

The group included UCLA students, staff members, a physician, a large group of Glendale High School students who held a school blood drive the week before Levine’s accident, and good Samaritans who drove from as far as Riverside to donate at UCLA.

“Now I have a face to go with every bag of blood I received,” Levine said with emotion to his donors.

In a classic example of life coming full circle, Levine and Horwitz will lead the pace car for the 2015 City of Angels Fun Ride, a cycling event that raises money for the UCLA Blood and Platelet Center. This year, the ride, which will start at Royce Hall, is set for April 26, one year to the day of Levine’s accident.

To learn about donating blood or platelets at UCLA, see gotblood.ucla.edu, call (310) 825-0888 or email [email protected]