Curing a deadly childhood disease, sharing her love of science, and a sleek ’68 Corvette drive this biochemist 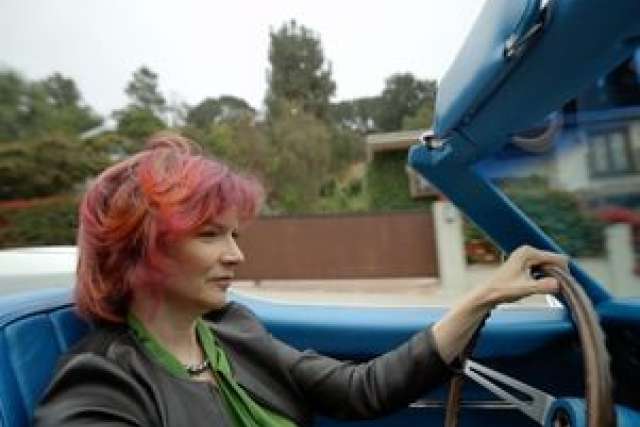 Spend a brief amount of time with biochemist Rachelle Crosbie-Watson and you'll quickly realize that "drive" is one of her favorite words.

With equal enthusiasm, she'll describe studying "the small molecules that drive life," and her 1968 convertible Corvette being "a blast to drive."

The symmetry is hard to miss: Crosbie-Watson drives a classic muscle car to UCLA, where she studies the biochemical reactions that drive muscle cell functions. Her lab is hotly pursuing new drugs that one day may halt the progression of a deadly childhood muscle-wasting disease, allowing kids with the disorder to lead normal lives.

The popular digital network, Mashable, recently profiled Crosbie-Watson for its "How She Works" series, which shadows a day in the life of women professionals working in fields related to science, technology, engineering and math, or STEM.

With her fiery pink hair, charismatic personality and affinity for high-speed cars, Crosbie-Watson doesn't resemble most people’s vision of a biochemist. But her talent for crafting fresh approaches to solving thorny scientific puzzles is exactly what makes her such an ingenious scientist.

"What I love most about my job is the opportunity to be creative," Crosbie-Watson said. "To solve the biggest problems in the world, we need individuals with different viewpoints to chime in. Working with people who are learning science for the first time — coupled with the thrill of discovery — makes for a really exciting recipe."

Crosbie-Watson wears a lot of hats. Starting July 1, she will chair the integrative biology and physiology department in the UCLA College. She is also a professor of neurology in the David Geffen School of Medicine at UCLA, and the education liaison for the Center for Duchenne Muscular Dystrophy at UCLA.

In a sunny space in the Terasaki Life Sciences Building, Crosbie-Watson oversees a window-lined laboratory staffed by young researchers. Reflecting her appeal as a mentor and role model, 14 of the 17 are female.

Her team is intent on finding a cure for Duchenne muscular dystrophy, a deadly genetic disease that slowly weakens every muscle of the body. Striking 1 in 5,000 boys, the disorder typically reveals itself in frequent falls near age 4, reliance on a wheelchair by age 12, and teenage loss of the ability to move the upper arms. Young men with Duchenne frequently die in their 20s, when their heart and lung muscles stop pumping, leading to organ failure.

"Duchenne is a horrible disease that steals young boys' childhoods and takes young men in the primes of their lives," Crosbie-Watson said.

The disorder is caused by a genetic error that blocks the production of dystrophin, a protein that normally protects the membrane around muscle cells as they contract and relax. Left susceptible to damage from daily wear and tear, the unprotected cells eventually begin leaking their contents into the surrounding tissue, progressively weakening the muscle until it stops working.

Her lab's earlier studies in mice gave Crosbie-Watson an insight into how to halt that process.

"We found that boosting levels of a molecule called sarcospan restored the membrane's ability to protect muscle cells," she said. "Sarcospan strengthens the muscle's capacity to withstand the forces of daily use, diminishing the harm caused by Duchenne."

Mashable
Rachelle Crosbie-Watson in her lab at UCLA.

Led by graduate student Cynthia Shu, the lab began scanning thousands of potential drugs to identify ones able to elevate cellular levels of sarcospan. Three years and 200,000 candidates later, the team has identified a handful of promising contenders for preclinical testing.

Crosbie-Watson applies the same imaginative approach she follows in research to her teaching. To educate the next generation of scientists about Duchenne, she created a virtual-learning course that invites Duchenne patients to describe what it’s like to live with the condition.

Open to undergraduate students enrolled at any University of California campus, the online course vividly illustrates the human toll and financial cost of the disease on patients and their families. Crosbie-Watson is currently developing a graduate program that explores muscle cell biology with an emphasis on translational research.

In recognition of her contributions to campus-wide education, Crosbie-Watson earned the 2013 UCLA Chancellor's Distinguished Teaching Award. This year she received the UCLA Life Sciences Faculty Excellence Award for education innovation.

"Getting other people excited about science energizes me," Crosbie-Watson said. "I love teaching young researchers how to put things in context and keep their eyes on the big prize."

"Science is something you can do for a really long time," she added. "Asking the next question never ends, it drives you forward. The chase is the motivation; that's what makes research so addictive."