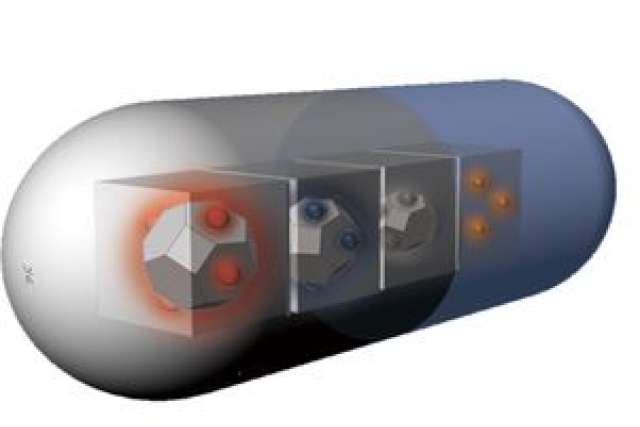 In greater than 90 percent of cases in which treatment for metastatic cancer fails, the reason is that the cancer is resistant to the drugs being used. To treat drug-resistant tumors, doctors typically use multiple drugs simultaneously, a practice called combination therapy. And one of their greatest challenges is determining which ratio and combination — from the large number of medications available — is best for each individual patient.

Dr. Dean Ho, a professor of oral biology and medicine at the UCLA School of Dentistry, and Dr. Chih-Ming Ho, a professor of mechanical engineering at the UCLA Henry Samueli School of Engineering and Applied Science, have developed a revolutionary approach that brings together traditional drugs and nanotechnology-enhanced medications to create safer and more effective treatments. Their results are published in the peer-reviewed journal ACS Nano.

Chih-Ming Ho, the paper’s co-corresponding author, and his team have developed a powerful new tool to address drug resistance and dosing challenges in cancer patients. The tool, Feedback System Control.II, or FSC.II, considers drug efficacy tests and analyzes the physical traits of cells and other biological systems to create personalized “maps” that show the most effective and safest drug-dose combinations.

Currently, doctors use people’s genetic information to identify the best possible combination therapies, which can make treatment difficult or impossible when the genes in the cancer cells mutate. The new technique does not rely on genetic information, which makes it possible to quickly modify treatments when mutations arise: the drug that no longer functions can be replaced, and FSC.II can immediately recommend a new combination.

“Drug combinations are conventionally designed using dose escalation,” said Dean Ho, a co-corresponding author of the study and the co-director of the Jane and Jerry Weintraub Center for Reconstructive Biotechnology at the School of Dentistry. “Until now, there hasn’t been a systematic way to even know where the optimal drug combination could be found, and the possible drug-dose combinations are nearly infinite. FSC.II circumvents all of these issues and identifies the best treatment strategy.”

The researchers demonstrated that combinations identified by FSC.II could treat multiple lines of breast cancer that had varying levels of drug resistance. They evaluated the commonly used cancer drugs doxorubicin, mitoxantrone, bleomycin and paclitaxel, all of which can be rendered ineffective when cancer cells eject them before they have had a chance to function.

The researchers also studied the use of nanodiamonds to make combination treatments even more effective. Nanodiamonds — byproducts of conventional mining and refining operations — have versatile characteristics that allow drugs to be tightly bound to their surface, making it much harder for cancer cells to eliminate them and allowing toxic drugs to be administered over a longer period of time.

The use of nanodiamonds to treat cancer was pioneered by Dean Ho, a professor of bioengineering and member of the UCLA Jonsson Comprehensive Cancer Center and the California NanoSystems Institute.

“This study has the capacity to turn drug development, nano or non-nano, upside-down,” he said. “Even though FSC.II now enables us to rapidly identify optimized drug combinations, it’s not just about the speed of discovering new combinations. It’s the systematic way that we can control and optimize different therapeutic outcomes to design the most effective medicines possible.”

“This optimized nanodrug combination approach can be used for virtually every type of disease model and is certainly not limited to cancer,” said Chih-Ming Ho, who also holds UCLA’s Ben Rich Lockheed Martin Advanced Aerospace Tech Endowed Chair. “Additionally, this study shows that we can design optimized combinations for virtually every type of drug and any type of nanotherapy.”

Both Dean Ho and Chih-Ming Ho have collaborated with other researchers and have validated FSC.II’s efficacy in many other types of cancers, infectious diseases and other diseases.