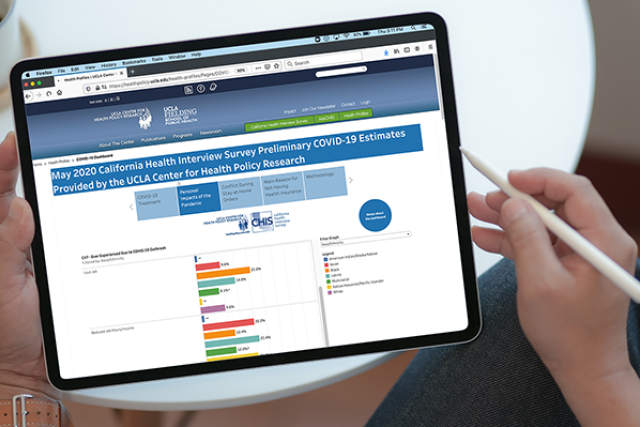 The data confirms that California's vulnerable groups are among those being hardest hit by the pandemic.
September 10, 2020
Estimated read time: 4 minutes

With more than 13,000 deaths and more than 712,000 confirmed cases in California alone, the COVID-19 pandemic has already had profound and lasting effects on the nation's most populous state.

Now, UCLA's California Health Interview Survey has published preliminary data from its 2020 survey, shedding new light on the pandemic's effects on employment and home life in California. The figures provide further confirmation that the state's vulnerable groups are among those being hardest hit by the crisis.

The California Health Interview Survey is conducted annually by the UCLA Center for Health Policy Research, and the full 2020 results will be published in October 2021. But the new survey included several questions focusing on the effects of COVID-19 and the UCLA researchers are making those results available now in an effort to aid the state’s response.

"When we started to see the impact that COVID-19 was going to have on the community, we felt called to produce data that can be used by decision-makers on who and how to assist during this unprecedented time," said Todd Hughes, director of the California Health Interview Survey.

In May, approximately two months after the state declared a state of emergency in response to the pandemic, researchers collected COVID-19–related information from more than 5,000 California adults. They found that 18.5% of respondents had continued to report to work in essential occupations — including health care and grocery stores — while 17.7% of all respondents said their job hours and income had been reduced, and 11.2% said their financial struggles were making it difficult to afford their basic needs.

In addition, 21.9% said they experienced an increase in conflict with other members of their households during the pandemic. And respondents with more people in their homes and those in families with children were more likely to report such increases.

The California Health Interview Survey, the largest state health survey in the nation, is used by policymakers, health experts, journalists and advocates. It is typically published in October the year after the data is collected, but this is the first time in the survey’s 20-year history that a portion of the data has been made available ahead of its normal publication schedule.

The dashboard enables users to parse the data using a range of filters — including race and ethnicity, geographic region, income level relative to the federal poverty level, citizenship status and whether or not respondents have health insurance — providing a more detailed picture of the effects of COVID-19 on certain segments of California's population.

The data reveals the disproportionate financial impact of the pandemic on Black and Latino residents. For example, 10.9% of all respondents said they had lost their jobs, but the figures were higher among Black people (21.0%) and Latinos (14.8%), as compared to 9.6% of white respondents. (Job loss was particularly acute among respondents who don't have health insurance: Fully 25.0% of those Californians said they had lost their jobs during the pandemic.) And 23.1% of Black people and 15.5% of Latinos reported having difficulty paying for basic necessities, versus 6.8% of white people and 11.2% of the survey overall.

Other key findings include:

"The data produced by our survey aligns with our center's mission of democratizing access to impactful and actionable data,"  said Ninez Ponce, director of the Center for Health Policy Research and the survey’s principal investigator. "We will continue to provide high-quality data and tools to assist researchers, policymakers, advocacy organizations and other partners in looking at crucial data across our diverse population."