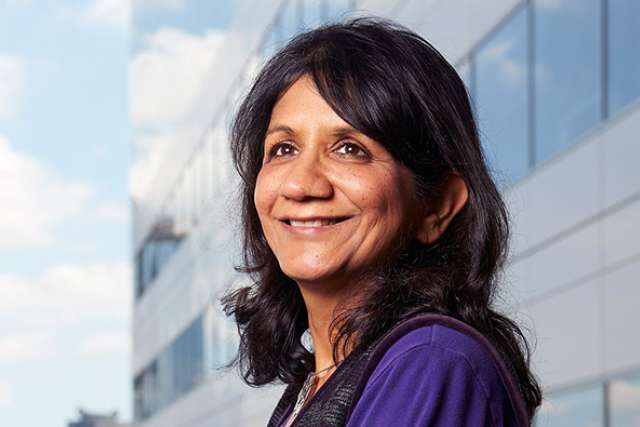 Amita Sehgal’s work explores how and why the body generates the need to sleep.
May 26, 2020
Estimated read time: 3 minutes

Amita Sehgal, whose pioneering discoveries of mechanisms that regulate circadian rhythms and sleep have deepened scientists' understanding of behavioral cycles, metabolism and healthy aging, has been named the 2020 recipient of the Switzer Prize awarded by the David Geffen School of Medicine at UCLA.

"I am deeply honored to be selected and to be among the distinguished group of scientists who received this influential prize before me," said Sehgal, who is the John Herr Musser Professor of Neuroscience at the Perelman School of Medicine at the University of Pennsylvania and director of the Chronology and Sleep Institute at Penn Medicine.

Established in 2015, the Switzer Prize honors scientists whose basic science discoveries have the potential to inspire transformative breakthroughs in medicine.

Sehgal's laboratory co-developed a fruit fly model for sleep that has been adopted worldwide to address longstanding questions about sleep regulation and function. Her work explores the molecular processes that confer a circadian rhythm on behavior and physiology, as well as how and why the body generates the need to sleep.

"Dr. Sehgal's bold and insightful research has transformed our understanding of circadian rhythms and pioneered the field of molecular mechanisms of sleep," said Dr. Kelsey Martin, dean of the Geffen School of Medicine. "Her work beautifully illustrates the intent of the Switzer Prize — to celebrate the importance of basic science advances to our mission as an academic medical center."

Sehgal is generous with her time outside the lab, as well. She mentors students at all levels, from high school to postdoctoral, and frequently delivers outreach lectures to enhance the public’s understanding of science.

A native of India, Sehgal earned her undergraduate degree from Delhi University and her master's from Jawaharlal Nehru University. She earned her doctorate from Cornell University and pursued postdoctoral research in the lab of chronologist Michael Young, the 2017 Nobel Prize recipient, as a Howard Hughes Medical Institute associate at Rockefeller University.

The date and format of the Switzer Prize lecture and award ceremony are pending due to the COVID-19 pandemic.

The Switzer Prize comes with a $25,000 honorarium. It was named in honor of Norman and Irma Switzer, who bequeathed a major gift to the David Geffen School of Medicine at UCLA in 2014 to support priorities of the school's leadership.