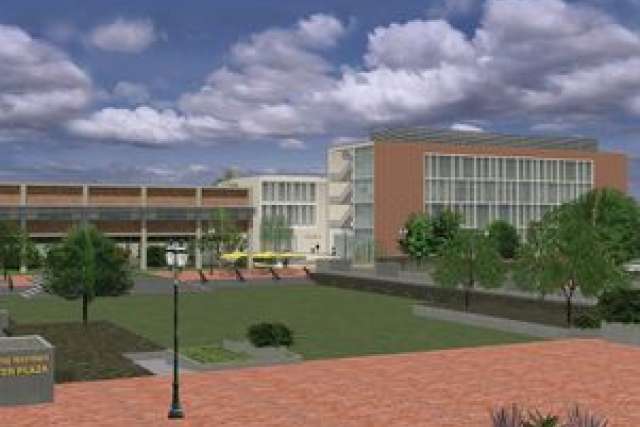 “This exceptionally generous gift is an enduring legacy of two people who clearly cared about the future of medicine and science,” said UCLA Chancellor Gene Block. “The university is honored to be the steward of such a transformative bequest.”

As a tribute to the couple, the UCLA Center for Health Sciences Plaza, where the announcement was made, was renamed the Irma and Norman Switzer Plaza.

“The Switzers’ extraordinary gift will immediately strengthen the work of our faculty and eventually benefit countless patients,” said Dr. A. Eugene Washington, vice chancellor of UCLA Health Sciences and dean of the David Geffen School of Medicine at UCLA.

“The Switzers, who were very humble people, would be gratified to know that the proceeds from their estate are going to advance medicine and health in such a profound way — and that this beautiful plaza, through which so many patients, physicians, scientists and students pass on a daily basis, will bear their names,” said Theodore Wolfberg, the Switzers’ attorney and friend.

Norman Switzer passed away in 2011 at the age of 84, and Irma died in 2013 at the age of 93. The couple were longtime residents of Pacific Palisades.

A veteran of the Korean War, Norman Switzer devised the concept of adding benches to bus stops throughout Los Angeles. In exchange for funding the bus benches, the city awarded his company, Norman Bench Advertising, a 20-year exclusive on advertising. He later sold the business and became a real estate investor. Irma Switzer, an accomplished weaver and member of the Palisades Weavers group, physically built two homes in Manhattan Beach with a friend. The couple was involved with the Fowler Museum at UCLA and the Natural History Museum of Los Angeles County.

“The Switzers’ selflessness manifested in many ways; UCLA’s recognition of their remarkable philanthropy in this vibrant and dynamic space is the highest honor they could ever have imagined,” said Arlynne Siegel, managing director and Los Angeles regional director of the personal trust department of MUFG Union Bank and trustee of the Switzers’ trust.

The bequest will advance medicine and health and will count toward The Centennial Campaign for UCLA, a $4.2 billion fundraising campaign, which was formally launched in May 2014 and is scheduled to conclude in 2019, the campus’s 100th year.

“The forethought the Switzers demonstrated by including UCLA Health Sciences in their estate plans illustrates the generosity that is their legacy,” said Kathryn Carrico, UCLA’s assistant vice chancellor for health sciences development.