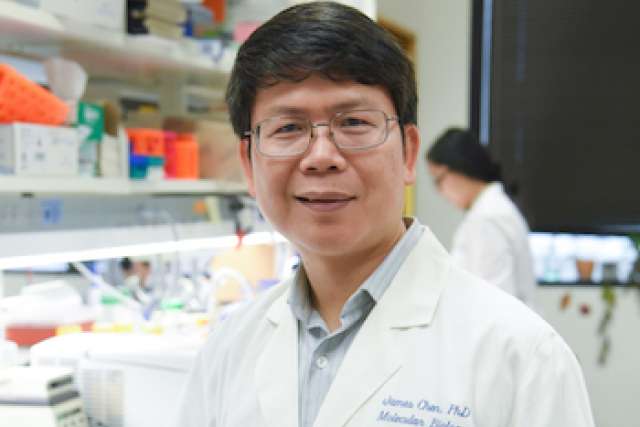 Dr. Zhijian (James) Chen of the UT Southwestern Medical Center in Dallas has performed groundbreaking work on the mechanisms underlying the cellular response to infection.

Dr. Zhijian (James) Chen of the UT Southwestern Medical Center in Dallas will be the 2019 recipient of the Switzer Prize, awarded by the David Geffen School of Medicine at UCLA. Chen has performed groundbreaking work on the mechanisms underlying the cellular response to infection.

Chen's group has been instrumental in the identification of immune response pathways that have significantly added to scientists' understanding of how these pathways work in microbial infections and autoimmune diseases.

Most significantly, his team at UT Southwestern discovered the DNA-sensing enzyme cGAS, which helps launch the immune defense system to battle infections.

"cGAS is like a burglar alarm that is turned on when a danger is detected, and it sets off the body's defense against viruses, bacteria and parasites," Chen told an interviewer for a UT Southwestern online publication.

Last October, Chen was named the winner of the 2019 Breakthrough Prize in Life Sciences for his discovery in 2012 of cGAS. And in 2005, Chen and a colleague discovered a protein that plays an important role in mounting an immune defense against RNA viruses. They named that protein MAVS (Mitochondrial Anti-Viral Signaling), a nod to Chen's favorite basketball team, the Dallas Mavericks.

"Dr. Chen's research into complex cellular biochemistry has led to the discovery of pathways and proteins that trigger immune and stress responses," said Dr. Kelsey Martin, dean of the Geffen School of Medicine. "The identification of MAVS and cGAS opens the door for new therapeutic approaches for a broad range of diseases from infectious agents like influenza to Ebola to autoimmune diseases and cancer."

Chen is a professor of molecular biology and director of the Center for Inflammation Research at UT Southwestern and holds that institution's George L. MacGregor Distinguished Chair in Biomedical Sciences. He is also a Howard Hughes Medical Institute investigator.

"I am extremely honored and humbled to have received the Switzer Prize," Chen said. "It's an unbelievable feeling that the discoveries made by the talented scientists and trainees in my lab are deemed worthy of this prestigious award. Such an effort and recognition by the award committee is a powerful endorsement and encouragement for us to make further discoveries."

UCLA's medical school awards the Switzer Prize annually to a researcher whose work enhances the understanding of human physiology or biological systems. The prize is intended to recognize research excellence in the biological or biomedical sciences essential to achieving breakthroughs in medical treatments.

Chen is scheduled to deliver the 2019 Switzer Prize lecture on November 19 at UCLA. The prize includes a $25,000 honorarium.

Chen grew up in a small village in southern China. "Growing up, I didn't really know anything about a science career and didn't have many options," Chen said in an interview. "At the time, the only way for kids in the village to get out and live a better life was to go to college. I went to college and got into the biology department and became interested in biochemistry after taking a class from our biochemistry teacher."

Chen earned his doctorate from State University of New York at Buffalo. Earlier, he earned an undergraduate degree in biology from Fujian Normal University in China. A member of the National Academy Sciences, he is also the recipient of numerous awards including the Lurie Prize in Biomedical Science from the Foundation for the National Institutes of Health and the NAS Award in Molecular Biology.