David Geffen to new UCLA doctors: 'You're making the world a better place' 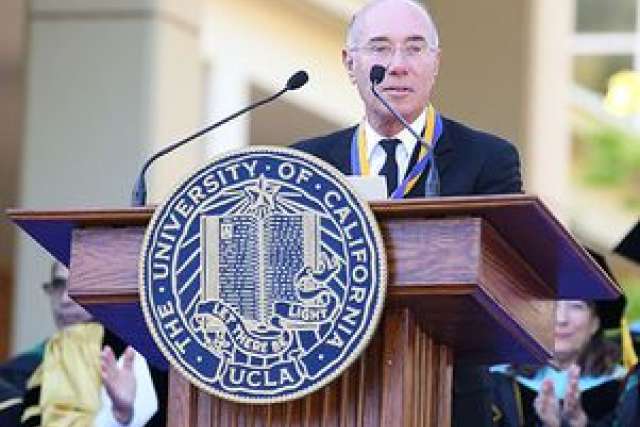 To prolonged applause and cheers, Geffen talked about his “magical odyssey in Oz,” referring to Los Angeles, the beginning of his career as a nurturer of talent in music and movies, and the important role UCLA played in those early days.

“It’s not possible for me to exaggerate how proud I am to have my name associated with this incredible institution and the very talented doctors who are making lives better for so many people around the world,” Geffen told the audience of newly minted doctors, faculty members, administrators, friends and families. “You’re making the world a better place. My mom always told me that if you have your health, you have everything. It turns out she was right. Thank you.”

In 1995, Geffen donated $10 million toward UCLA’s Westwood Playhouse, which was renamed the Geffen Playhouse.

Then in 2002, he made a $200 million unrestricted gift to UCLA’s medical school — the largest ever given to UC and to UCLA. At the time, it was the largest single donation ever made to a U.S. medical school and helped elevate the David Geffen School of Medicine at UCLA to a world-class institution for education and research.

A decade later, in 2012, the philanthropist established the $100 million merit-based David Geffen Medical Scholarships. These scholarships cover the entire cost of a medical education for nearly 20 percent of entering students. The gift — unprecedented in medical school history — has impacted medical education nationwide by inspiring other medical schools to increase financial support for their students.

“Your national movement to relieve medical students of debt has prompted more young people to pursue careers as physicians,” according to the medal citation. “Your visionary approach to addressing the nation’s health-workforce crisis has been of particular benefit to UCLA, where you also endowed the David Geffen School of Medicine. Your extraordinary advocacy and philanthropy exemplify the spirit of optimism that defines UCLA.”

The UCLA Medal is bestowed on those with exceptionally distinguished academic and professional achievement whose bodies of work or contributions to society illustrate the highest ideals of UCLA. Recipients have included national and international leaders in government, education, science, industry and the arts.