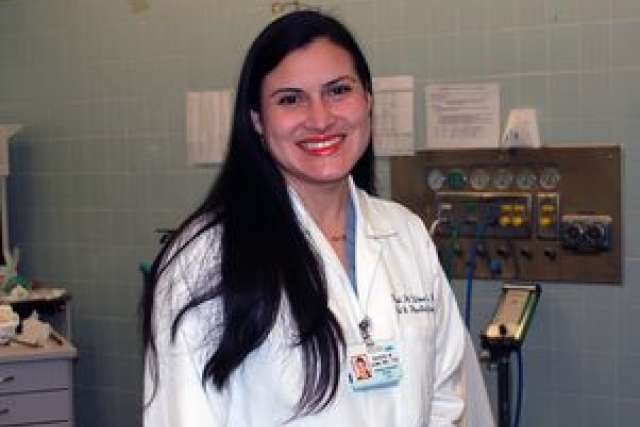 So Greg encouraged her to attend the annual California Dental Association session with a friend. “I actually crashed the dentistry event,” confessed Ulma, who goes by “Rocky.” “I approached the Hispanic Dental Association booth and struck up a conversation with a female dentist who was approachable and welcoming.”

Soon Ulma was telling Dr. Lilia Larin about her goal of becoming a dentist. The two exchanged contact information and Larin told her to expect a call from a faculty member from UCLA School of Dentistry who was starting a program designed to help people apply to dental school.

The next day, Drs. Marvin Marcus and Bruce Sanders contacted Ulma. Marcus told Ulma that she was the perfect candidate for his new program aimed at recruiting disadvantaged and underrepresented students into dentistry. She was from a poor neighborhood in Puerto Rico and had the basic science foundation, having majored in chemistry at the University of Puerto Rico and had completed master’s level coursework in organic chemistry.

“To be honest,” Ulma said, “I was a little star-struck that a school such as UCLA would have an interest in me.”

Shortly after her first contact with Marcus, Ulma became one of the first students to participate in UCLA School of Dentistry’s then-fledgling recruitment initiatives and helped paved the way for the current Post-Baccalaureate program, which guides students step-by-step, through the daunting dental school application process. Since 2003, the program has mentored 40 post-baccalaureate students, 30 of whom have gone on to attend dental school. The program, which is funded in part by UCLA School of Dentistry Dean No-Hee Park's office, is the first of its kind in Southern California.

“Our educational pipeline initiatives are something I am very proud of and are an important element of our outreach and diversity goals,” said Dr. Park. “Our Post-Baccalaureate Program has helped young people reach their full potential and has enriched the dental field with professionals from all backgrounds.”

For Ulma, the coaching began with a meeting at the School of Dentistry’s Office of Student Affairs where Marcus and Sanders reviewed her undergraduate transcripts, looked at her dental admission test (DAT) scores and went over a draft of her application essay. Ulma had strong grades from her undergraduate work, but needed to work on her DAT scores and wasn’t as strong in the interview portion. Knowing this, Marcus and Sanders helped set-up a mock-interview panel that resemble an actual interview she would eventually face.

“The mock interview panel was a lot harder than I expected,” she said. “They asked a lot of questions, such as why I would be a good fit for that particular school and what makes me a good candidate for dental school.”

They also advised her to do some volunteer work in dentistry, so Ulma immediately began volunteering at the Wilson-Jennings-Bloomfield UCLA Venice Dental Center – a community clinic in West Los Angeles that provides dental care to low-income adults and children.

The entire process took about a year and a half, from reviewing her pre-requisites and re-taking the DAT to applying to numerous schools and interviewing. After that though, Ulma was accepted to her top choice, UCLA, and began dental school in 2004.

“Looking back at how far I’ve come is sometimes unbelievable,” Ulma said.

Originally from Levittown, Puerto Rico, a rough, urban neighborhood outside of the country’s capital, Ulma recalls the area where she grew up as, “a very bad neighborhood with high pregnancy rates, drug dealers and teenagers getting shot.”

Ulma’s police officer father also owned a woodworking shop where he made furniture to supplement his salary, and he would regularly bring her to the shop to keep her out of trouble.

“It was the experience of working with my father in his shop where I fell in love with using my hands to make something beautiful, yet functional,” she said.

Rather than follow her father exactly, though Ulma chose to pursue dentistry to combine her love of working with her hands along with helping people.

With the support of her husband and faculty at UCLA, Ulma achieved her long-held dream of becoming a dentist when she graduated with the D.D.S. class of 2008.

“During dental school, I would often meet with Dr. Marcus for breakfast and he would remind me to take it day-by-day,” she recalled. The support she received from Marcus and Sanders has inspired Ulma to volunteer her time to assist other students with their dental school applications.

Raquel Ulma with one of her mentors, Dr. Earl Freymiller.

Dental school was just the beginning for Ulma. In 2008, she successfully applied to and was accepted to the UCLA Oral and Maxillofacial Surgery (OMS) residency program, a highly competitive program that only offers two slots per year out of approximately 100 applications. Ulma graduated from the OMS residency program with an M.D. degree and a certificate of specialization in oral and maxillofacial surgery this June.

“She is truly a remarkable individual and I believe she will be a model for many women and minorities in the future,” Marcus said.

While in the OMS residency program Ulma met Dr. Earl Freymiller, professor of clinical dentistry and chairman of the section of oral and maxillofacial surgery. Freymiller, an oral surgeon, introduced Ulma to the Thousand Smiles Foundation. Ulma and Freymiller, along with other oral surgeons travel to Ensenada, Mexico several times a year where they perform surgery on children with cleft lip and palate.

“Dr. Freymiller has been such an invaluable mentor to me,” Ulma said. “I’ve witnessed patients he’s worked on come back years later to introduce them to their families and thank him for what he’s done for them. He is an example of who I want to become.”

In summer 2015, Ulma will start a three-year residency in the Plastic and Reconstructive Surgery program, and learn to perform complex facial and body reconstruction to help replace congenitally or traumatically missing body parts.

“I wouldn’t be where I am today without the Post-Baccalaureate program,” she said. “People do what they know. For example, if there isn’t a role model for how to get into dental school or the health sciences, then younger minorities won’t even see it as an option. I look at where I’m at in my career and feel incredibly lucky for the people who have been role models to me.”