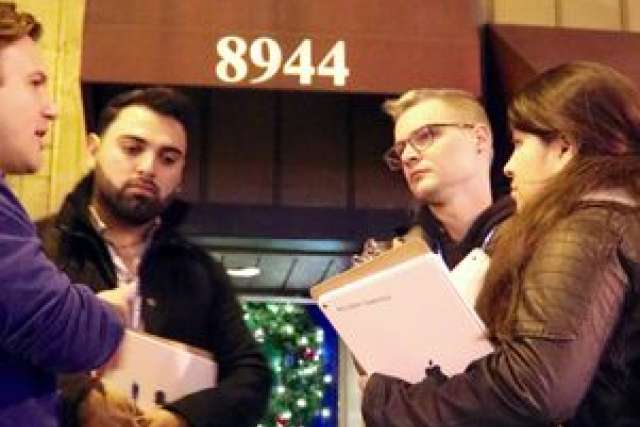 Despite a yearlong outbreak of invasive meningococcal disease in Southern California primarily affecting gay and bisexual men, less than 27 percent of men who have sex with men in Los Angeles County have been vaccinated for meningitis.

The findings released today by the California HIV/AIDS Policy Research Center in collaboration with the UCLA Luskin School of Public Affairs, the Los Angeles LGBTQ+ Center and AIDS Project Los Angeles Health call for more education about the disease and more places offering immunization throughout Southern California at venues where gay and bisexual men socialize.

More than 500 men were interviewed about their knowledge of the meningitis outbreak by UCLA Luskin’s Ian Holloway, an assistant professor of social welfare, and teams of researchers who visited venues throughout Los Angeles County. Most of the canvassers were current UCLA students or recent graduates.

“Our rapid-response research suggests that coordinated efforts to standardize data collection about sexual practices in conjunction with immunization will enable better tracking of meningitis vaccination among gay and bisexual men,” said Holloway, who is also director of the UCLA Luskin-based Southern California HIV/AIDS Policy Research Center.

Meningococcal disease is often characterized with sudden onset of high fever, headache, nausea, vomiting, rash, stiff neck and confusion, which can lead to rapid septic shock and death if not treated quickly. Vaccination is highly effective and can prevent the disease. The current outbreak in Southern California is the second in the area in recent history. A 2014 meningitis outbreak led to the deaths of three gay men in their 20s.

Despite the outbreak and vaccination recommendations from the California Department of Public Health, the majority of respondents interviewed by the UCLA team were not protected against meningitis.

Holloway noted that HIV-positive people are at particular risk for developing serious health issues if infected with meningitis and are recommended to receive a two-dose primary series of meningitis vaccination. Few HIV-positive men surveyed by Holloway’s team had received two doses of the vaccination.

“Primary care doctors who treat gay and bisexual men and HIV-positive people should talk to their patients about the ongoing outbreak and make sure they receive the full recommended dosing,” said Phil Curtis, director of government affairs at AIDS Project Los Angeles Health.

The study praises the efforts of the Los Angeles County Department of Public Health Immunization Program, which distributed free vaccines, and of participating community-based organizations such as AIDS Healthcare Foundation and the Los Angeles LGBTQ+ Center, but researchers concluded that more needs to be done.

In addition to Holloway, study authors include Elizabeth Wu and Jennifer Gildner from the Southern California HIV/AIDS Policy Research Center, and Vincent Fenimore and Paula Frew from Emory University.