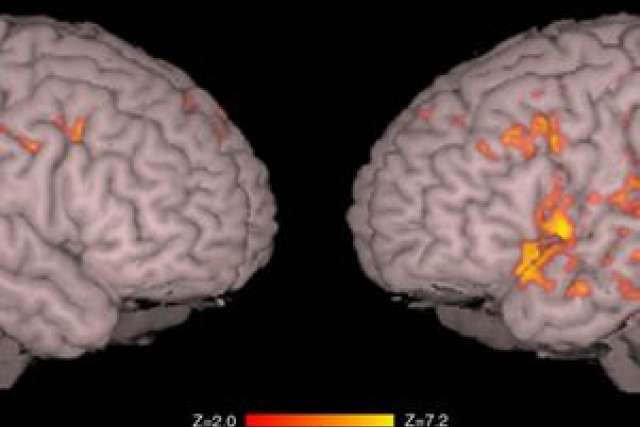 Reported in the December edition of the journal Archives of General Psychiatry, the UCLA findings are the first to demonstrate a biological reason for patients' distorted body image.

"Our discovery suggests that the BDD brain's hardware is fine, but there is a glitch in the operating software that prevents patients from seeing themselves as others do," said Dr. Jamie Feusner, principal investigator and assistant professor of psychiatry at UCLA's Semel Institute for Neuroscience and Human Behavior. "Now that we've identified a possible physical cause, down the road we may be able to pinpoint ways that patients' brains can be retrained to perceive faces more accurately."

Individuals with BDD fixate on an imagined flaw in their appearance or a slight physical abnormality. To fix their "problem," they tend to pursue plastic surgery — sometimes repeatedly. They often feel ashamed, depressed and anxious, increasing their risk of suicide.

Affecting an estimated 2 percent of the population, BDD tends to run in families and is especially common in people with obsessive-compulsive disorder. Thirty percent of people with BDD suffer from eating disorders, which are also linked to a distorted self-image.

Feusner was curious whether BDD patients' brains interfered with the interpretation of visual input, and if so, whether this glitch occurred when looking at faces other than their own.

"We hoped that asking patients to focus on others' faces would allow them to be less emotionally engaged during the experiment," he said.

For the first time, functional magnetic resonance imaging (fMRI) was used to reveal how BDD patients' brains processed visual input. The UCLA team outfitted 12 participants with special goggles that enabled them to view digital photos of various faces as they underwent a brain scan.

Each volunteer viewed three types of images. The first type was an untouched photo. The second type was a photo altered to eliminate facial details that appear frequently, such as freckles, wrinkles and scars. This "low-frequency" technique blurred the image. The third type of image essentially subtracted the blurred second image from the untouched photo. This "high-frequency" technique resulted in an image resembling a finely detailed line drawing.

Feusner's team compared the BDD patients' responses to 12 control subjects matched by age, gender, education and handedness. What the scientists observed surprised them.

"We saw a clear difference in how the right and left sides of the brain worked in people with BDD versus those without the disorder," said Feusner.

BDD patients more often used their brain's left side — the analytic side attuned to complex detail — even when processing the less intricate, low-frequency images. In contrast, the left sides of the control subjects' brains activated only to interpret the more detailed high-frequency information. Their brains processed the untouched and low-frequency images on the right side, which is geared toward seeing things in their entirety.

"We don't know why BDD patients analyze all faces as if they are high frequency," said Feusner. "The findings suggest that BDD brains are programmed to extract details — or fill them in where they don't exist. It's possible they are thinking of their own face even when they are looking at others."

Feusner also recently discovered that the more severe a BDD patient's symptoms, the more strongly the brain's left side activates during visual processing.

Feusner is currently studying how BDD patients process their own faces in order to explore how emotional arousal may influence visual processing.

"All of these findings indicate that BDD has a biological link and can no longer be attributed solely to our society's focus on appearance," he said.

A psychiatrist specializing in obsessive-compulsive disorders, Feusner leads UCLA's body dysmorphic disorder program, which uses medications and cognitive behavioral therapy to improve patients' symptoms and functioning. To learn more about the program or his research studies, call (310) 206-4951 or visit www.npi.ucla.edu/bdd/index.php.