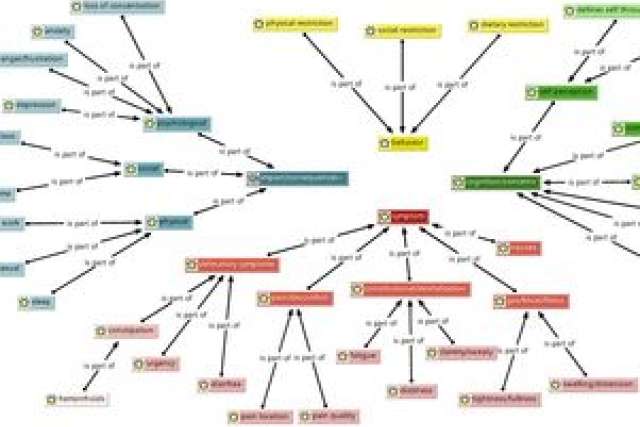 UCLA researchers interviewed people with diverticulitis and confirmed that many suffer psychological and physical symptoms long after their acute illness has passed.

For the study, published this week in the peer-reviewed journal Quality of Life Research, a UCLA team led by Dr. Brennan Spiegel interviewed patients in great detail about the symptoms they experience weeks, months or even years after an acute diverticulitis attack. Their striking findings add to growing evidence that, for some patients, diverticulitis goes beyond isolated attacks and can lead to a chronic condition that mimics irritable bowel syndrome.

As they age, most people develop diverticulosis, a disorder characterized by the formation of pouches in the lining of the colon. More than 50 percent of people over 60 have the condition, but the pouches usually don’t cause any problems. Occasionally, however, the pouches become inflamed, leading to a related disorder called diverticulitis, which causes pain and infection in the abdomen. Doctors usually treat diverticulitis with antibiotics, or in more severe cases, surgery.

The condition has long been thought to be acute with periods of relative silence in between attacks, but according to researchers, that’s not true for everyone. Some patients experience ongoing symptoms.

In an earlier study, Spiegel and colleagues found that people suffering from diverticulitis have a four-fold higher risk of developing IBS after their illness, a condition called post-diverticulitis irritable bowel syndrome, and that patients had anxiety and depression long after the initial attack. However, that study was based on a database of more than 1,000 patients and did not draw from personal testimonials from people living with diverticulitis.

In the latest research, patients described feelings of fear, anxiety and depression, and said they had been stigmatized for having the condition. Interviewees also said they live in constant fear of having another attack, are scared to travel and feel socially isolated. In addition, many patients continue to experience bothersome physical symptoms such as bloating, watery stools, abdominal pain, incomplete evacuation and nausea.

“We dug deeper into identifying the chronic physical, emotional and behavioral symptoms that can profoundly change people’s lives after an attack of diverticulitis,” said Spiegel, a professor of medicine at the David Geffen School of Medicine at UCLA and the Fielding School of Public Health. “Our findings reveal that many people suffer silently with severe quality-of-life problems long after an acute diverticulitis attack.”

The researchers used those insights to develop a questionnaire to help doctors better assess the long-term impact of diverticulitis, which ultimately could lead to better understanding and management of the disease.

“Doctors often don’t know to ask about these ongoing symptoms,” Spiegel said. “We hope that our findings and new tool will help physicians better tailor individual treatment and reassure patients that they aren’t alone.”

To help them develop the new screening tool, researchers reviewed literature on quality-of-life measures used to gauge diverticulitis and related gastrointestinal conditions, and they interviewed experts and conducted focus groups with people who had suffered diverticulitis attacks. The team then developed a framework for the tool based on the most commonly described physical, social and psychological symptoms.

The researchers created a draft survey and tested it on 197 patients who had reported symptoms after an acute diverticulitis attack. Then, using feedback from those patients, the team refined the survey to create the final 24-question version.

“This new screening tool will help clinicians better define and manage diverticulitis,” said study author Mark Reid, principal statistician at the UCLA/VA Center for Outcomes Research and Education. “We can now screen patients for poor quality of life based on their condition and then actively manage their diverticulitis like other chronic gastrointestinal conditions.”

Spiegel said that more study is needed to help researchers understand how diverticulitis can trigger the longer-lasting symptoms.

The study was funded by Shire Pharmaceuticals.