Long before he became chief of plastic and reconstructive surgery at the David Geffen School of Medicine at UCLA, Timothy Miller, MD, was a physician with the Army Special Forces during the Vietnam War, receiving a Bronze Star for his service.

Dr. Miller’s surgical expertise and military history made him a perfect fit for what would become Operation Mend, a UCLA Health program that provides advanced reconstructive plastic surgery and comprehensive physical and mental health care, at no charge, for post-9/11 veterans severely injured during conflicts in Iraq and Afghanistan.

Dr. Timothy Miller, former chief reconstructive surgeon for UCLA Health Operation Mend, has been recognized by the Congressional Medal of Honor Society with the Distinguished Citizen Award, presented to individuals dedicated to values of freedom, courage, selfless service and valor. He received the award during the Patriot Awards Gala in Knoxville, Tenn., on Saturday, Sept. 10.

“I’m proud of him,” says Christopher Crisera, MD, who has worked alongside Dr. Miller since the earliest days of Operation Mend and now serves as the program’s executive medical director.

“I’m proud that he’s getting this honor and I think it’s a great recognition,” Dr. Crisera says. “And I think it reflects really well on the program. It’s really a unique model and a wonderful story. And all of us who participate in it are blessed to be part of Operation Mend.”

Dr. Miller remained connected to veterans’ health care after his service in Vietnam in 1965 and 1966. In 1973, he was named chief of plastic surgery at the West Los Angeles Veterans Affairs Medical Center, a post he held until 2006.

Operation Mend was born in 2007, after philanthropist and Ronald Reagan UCLA Medical Center board member Ronald A. Katz and his wife, Maddie Katz, saw a news report about a young Marine seriously burned by an explosion while serving in Iraq. The couple imagined connecting wounded warriors with the nation’s top plastic surgeons at UCLA Health.

The Marine featured in the news report, Cpl. Aaron P. Mankin, became Operation Mend’s first patient. He was riding in a 26-ton tank when an improvised explosive device ripped through it, killing six Marines and severely injuring many others, including Mankin, whose ears, nose and lips were burned away.

The dean of the medical school called Dr. Miller to see if he’d be willing to operate on the young man.

“How about tomorrow?” Dr. Miller replied. 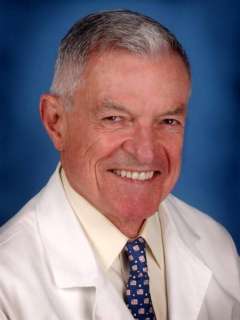 “I was fortunate that, when he committed to launching Operation Mend, he brought me in right at the beginning,” Dr. Crisera says. “So we worked on a lot of very complicated cases together. I learned a lot from him about how to handle very delicate tissues and plan out complicated reconstructions in multiple stages to deliver consistent results.”

“He basically had achieved the pinnacle of academic plastic surgery and had a very strong private cosmetic practice in Los Angeles, and he put a lot of those things on the back burner to dedicate himself to Operation Mend as the program really started to grow,” Dr. Crisera says. “His legacy is intimately tied up in the success of Operation Mend.”

Dr. Crisera will be at the Congressional Medal of Honor Society gala to watch his mentor be recognized.

Dr. Miller was so moved by his work with wounded service members that he published a book of their stories – “Surgical Reconstruction of War: Operation Mend” -- in 2015, the year he retired from medical practice.

“It was the most satisfying effort of my entire career,” Dr. Miller says of his work with Operation Mend. “And the most important accomplishment I ever made.”