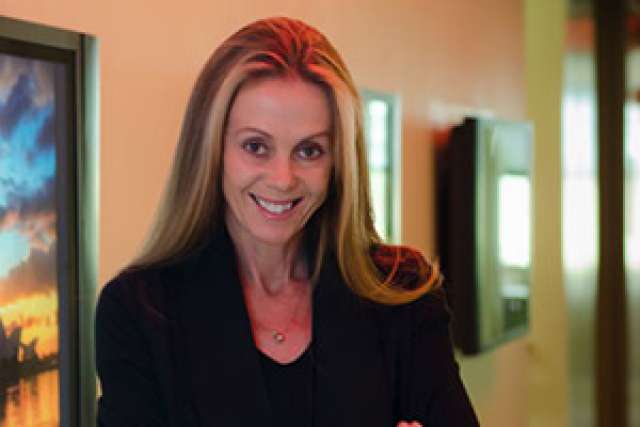 Katherine Narr, senior author of the study, says the findings could help doctors identify which patients would respond best to treatment.

Scientists know that depression affects the brain, but they still don’t know why some people respond to treatment and others do not.

Now UCLA researchers have shown for the first time in a large cohort of patients that electroconvulsive therapy, or ECT, changes certain areas of the brain that play a role in how people feel, learn and respond to positive and negative environmental factors. The team imaged the hippocampus and amygdala in patients before, during and after undergoing ECT — also known as shock treatment — and compared those images to scans of healthy brains.

The scientists also showed that in patients with major depression, as the hippocampus increases in size, mood improved and parts of the hippocampus and amygdala change more with treatment.

The findings provide vital clues that could help doctors identify patients who will respond well to treatment. They would also help spare patients who won’t respond to treatment from taking drugs that ultimately won’t work for them, said Katherine Narr, a senior author of the study and a UCLA associate professor of neurology.

Major depression affects 350 million people each year and it affects not only those who suffer but also their families, the health care system and the economy.

“Major depression affects all ages, races and ethnic groups, and it has serious consequences on people’s family lives and work,” Narr said. “People with depression also are at higher risk for suicide, which on average accounts for more deaths than car accidents, natural disasters and war each year. Unfortunately, standard types of medication used to treat major depression take a long time to work, and for at least a third of people, the medication will not work well enough to provide any real help.”

Finding better ways to select patients for treatments that will alleviate their symptoms would go a long way to reducing that suffering, Narr said.

The study was published online by the peer-reviewed journal Biological Psychiatry.

ECT, which has been used for more than 50 years, carries a certain stigma. However, within the past decade, advances in anesthesia and electrical stimulation equipment, and new evidence about electrode lead placement have improved the safety and reduced side effects of the procedure, said Shantanu Joshi, the study’s first author and a UCLA assistant professor of neurology.

In addition, advances in high-resolution MRI have allowed more accurate measurement of the changes to the brain induced by ECT.

“ECT has been shown to be very effective for treating patients with major depression who don’t respond well to other treatments,” Joshi said. “People with smaller hippocampal size prior to starting treatment are less likely to respond as well to treatment. While our research investigates structural neuroplasticity in depression in response to ECT, we believe our findings are of much broader interest to the field.”

The researchers believe that the conclusions also would extend to more standard medications used to treat depression, including selective serotonin reuptake inhibitors, and could be used to predict patients’ responses.

The team took three sets of images of 43 patients who were undergoing ECT: before their treatments, after their second session and within one week after they completed treatment. The images were compared to two sets of brain scans from 32 healthy people.

Going forward, the UCLA team will examine the relationship between the neuroplasticity of the hippocampus structure and its neurochemistry in terms of the metabolite response, which could help them understand how metabolism in the brain is either suppressed or excited in response to ECT. Additionally, the researchers will use the shapes of the hippocampus and amygdala to classify and predict depression diagnosis and treatment response, and will investigate how structural changes are related to novel disease maintenance treatments for depression, as well as relapse and recurrence rates.

“Our findings newly show that hippocampal structure prior to ECT may be an important indicator of treatment outcome,” the study states. “That is, patients with smaller hippocampal volumes at baseline are shown to more likely exhibit increases in volume with ECT and to show concomitant improvements in clinical symptoms. Results further indicate that both clinical response to ECT and ECT-induced changes in volume occur rapidly.”