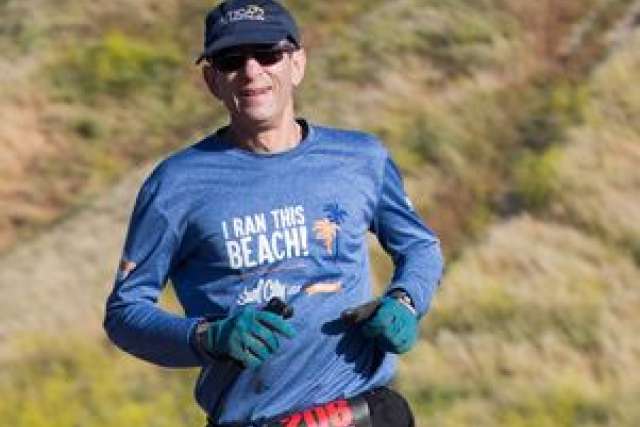 An avid triathlete and marathon runner, Gil Solomon was concerned when an echocardiogram test done in 2014 showed that he had a congenital defect in his heart called bicuspid aortic valve disease. His aortic valve only had two cusps, or leaflets, that opened and closed to regulate blood flow instead of the normal three. The defect causes the valve to narrow, which strains the heart and reduces or blocks blood flow from the heart to the body. The same defect may also weaken the walls of the aorta, the main artery from the heart, which can lead to a tear.

Many people, like Solomon, are unaware they have the condition until it is discovered later in adulthood. After diagnosis, these people typically take medications and may be advised to get their valve surgically replaced.

"I had met with a handful of surgeons around the country and most recommended immediate surgery because I had a risk of a ruptured aneurysm," said Solomon, 66, who lives in West Hills about 30 miles northwest of downtown Los Angeles. "But I felt confident in the national guidelines for managing my aneurysm and valve disease, which showed surgery could wait, and Dr. Jamil Aboulhosn, my UCLA cardiologist, supported my decision."

Aortic valve replacement surgery is a decades-old procedure during which patients receive an artificial valve to replace natural valves that are diseased or have congenital defects. The options include mechanical valves, which last a long time and are typically used in younger patients. However, they require lifelong blood-thinning medications to prevent clots.

People who receive replacement valves made from biological tissue do not have to take blood-thinning medication. However, the valves, which are made from cow or pig tissue, may last for only 10 to 15 years before a new replacement valve is needed.

During the next few years, Solomon, who is a physician, did some research and learned about recent advances in technology that were improving the longevity of these types of tissue valves and their performance. At the time, the new technology was not available in the United States, but he was willing to be patient.

"Biological heart valves have not really changed in the past 10 years," said Dr. Richard Shemin, the Robert and Kelly Day Professor of Surgery and chief of cardiac surgery at UCLA Health. "There has been a real need to make tissue valves more durable, especially for patients under age 60, who will live with them for a longer period of time."

One of the problems is that replacement tissue valves narrow due to calcification of the tissue. Traditional tissue valves made of cow, or bovine, pericardial tissue are treated and stored with a wet substance that causes the collagen in the tissue to strengthen. But a chemical reaction to this storage process eventually leads to calcification. This obstructs blood flow through the valve, Shemin said.

The new type of artificial tissue valve known as the Inspiris Resilia aortic valve is designed to block the chemical reaction that causes calcification and allows the valve to be stored dry. The valve was approved for use in 2017 by the U.S. Food and Drug Administration and has been used in Europe since 2016.

"This device is expandable to allow a valve-in-valve procedure," Shemin said. "That means we can potentially implant a new valve right inside the existing one using a minimally invasive transcatheter aortic valve replacement procedure."

Three years after his diagnosis, a treadmill test showed that Solomon was not getting adequate blood flow to his heart. He realized that his valve disease was getting worse and it was finally time for surgery.

On April 11, Shemin performed the procedure to remove Solomon's defected aortic valve and hand sew the new Inspiris valve in place. In addition, he had an aneurysm of the ascending aorta that required replacement. He was discharged from the hospital four days later.

With his health improved, Solomon hopes to return to his favorite pastime.

"Once I'm cleared to train again, I plan to return to triathlon and multisport," he said. "At 66, I'll pass on doing another Ironman but I do hope to qualify for the 2020 Boston Marathon."

Disclosure: Shemin is a member of the scientific advisory board of Edwards Lifesciences Corporation, which manufactures the Inspiris valve. Aboulhosn serves as proctor for Edwards Sapien valve implants and was the primary investigator for the Compassion SAPIEN 3 heart valve trial at UCLA.