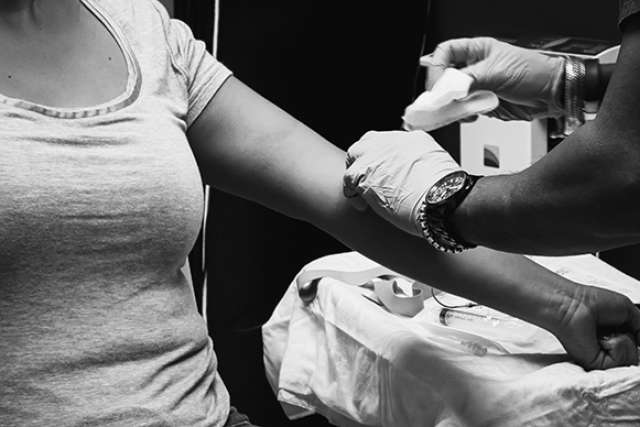 "The novelty of this research is being able to break down a mother's DNA and being able to hone in on the health of the placenta — something that researchers have never been able to do before," said the study's lead author, Dr. Sherin Devaskar.
October 13, 2020
Estimated read time: 3 minutes

A blood test commonly used to detect fetal genetic abnormalities can be modified to help predict complications associated with pregnancy before any symptoms develop, according to UCLA researchers and colleagues.

Their preliminary study is the first to link certain cell-free nucleic acids — genetic material shed from the placenta into the mother's blood — to adverse outcomes in pregnancy, including ischemic placental disease and gestational diabetes, and to show that analyzing blood for such cell-free DNA signatures could potentially predict these serious complications.

The researchers found that during the first and early second trimesters, placenta-specific DNA increased among those women who went on to develop gestational diabetes. They also identified several differently expressed genes and create a model with a predictive value for adverse pregnancy outcomes.

Although the analysis of genetic material in mothers' blood has been used to screen for genetic abnormalities in pregnancy, this is the first time these specific methods of screening for cell-free DNA signatures have been used as a means of providing a more accurate prediction.

The research points to a promising approach that could improve outcomes for mothers and their babies using existing technologies, said the study's lead author, Dr. Sherin Devaskar, physician-in-chief of UCLA Mattel Children's Hospital and a distinguished professor of pediatrics at the David Geffen School of Medicine at UCLA.

The study followed a diverse group of pregnant women between February 2017 and January 2019, testing their blood periodically throughout gestation. By the end of the study, 160 participants had given birth, with 102 maternal and 25 cord plasma samples taken along the way.

If confirmed in larger studies, cell-free DNA blood tests may help identify issues in the placenta as an indicator of a healthy mother and fetus.

"The novelty of this research is being able to break down a mother's DNA and being able to hone in on the health of the placenta — something that researchers have never been able to do before," Devaskar said. "This research warrants application of automated methodologies in multicenter trials to improve future testing and screening for all women."

In addition to Devaskar, other study authors include first lead author Giorgia Del Vecchio, a postdoctoral researcher in the department of pediatrics at the David Geffen School of Medicine at UCLA; Qingjiao Li, a professor at the Eighth Affiliated Hospital at Sun Yat-Sen University in Shenzhen, China; and Wenyuan Li, an associate adjunct professor in the division of pathology and laboratory medicine at the Geffen School of Medicine.

The findings are published Oct. 13 in the journal Epigenetics.