Even fractures in arm, wrist increase risk for future breaks in postmenopausal women 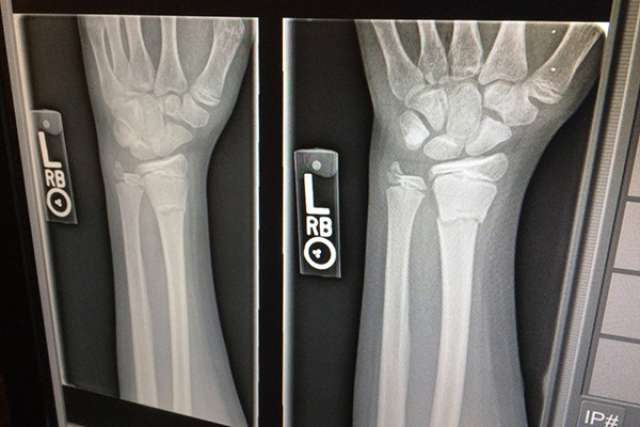 A fracture, no matter the location, indicates a general tendency to break a bone in the future at a different location, said Dr. Carolyn Crandall, the study's lead author.
May 5, 2021

Current guidelines for managing osteoporosis specifically call out hip or spine fractures for increasing the risk for subsequent bone breaks. But a new UCLA-led study suggests that fractures in the arm, wrist, leg and other parts of the body should also set off alarm bells.

A fracture, no matter the location, indicates a general tendency to break a bone in the future at a different location, said Dr. Carolyn Crandall, the study's lead author and a professor of medicine at the David Geffen School of Medicine at UCLA.

"Postmenopausal women and their physicians may not have been aware that even a knee fracture, for example, is associated with increased risk of future fractures at other locations of the body."

The study is published today in the peer-reviewed journal EClinicalMedicine.

The researchers examined records from 1993 through 2018 for more than 157,000 women aged 50 through 79. Data was sourced from the Women's Health Initiative, a national study funded by the National Heart, Lung, and Blood Institute.

The researchers found that among postmenopausal women, initial fractures of the lower arm or wrist, upper arm or shoulder, upper leg, knee, lower leg or ankle, and hip or pelvis were associated with an approximately three- to six-fold increase in risk for subsequent fractures. That finding held for all of the age groups studied, with higher risks being more pronounced among non-Hispanic Black, Hispanic or Latina, and Asian Pacific Islander women than among non-Hispanic White women.

The authors noted some limitations to the study, including the fact that the fractures were self-reported by participants. However, earlier research has demonstrated that statistics for self-reported fractures is fairly accurate compared with statistics from medical records.

Also, the researchers did not have information about broken ribs, which may have led them to underestimate the risk for other fractures — it's possible that the true effect could be even more pronounced than the results show — and bone mineral density was measured for only a subset of participants, so the researchers could not investigate whether the risk for future fractures was associated with bone density.

Although there is a need for more studies to understand why women of some ethnicities have a greater risk for a subsequent fracture following an initial bone break, the researchers write that their findings "indicate that aggressive follow-up of postmenopausal women who experience initial fracture is indicated. Our results will inform counseling, future guidelines, and the design of intervention trials regarding the selection of appropriate candidates for pharmacotherapy."

The study was funded by the National Institutes of Health.