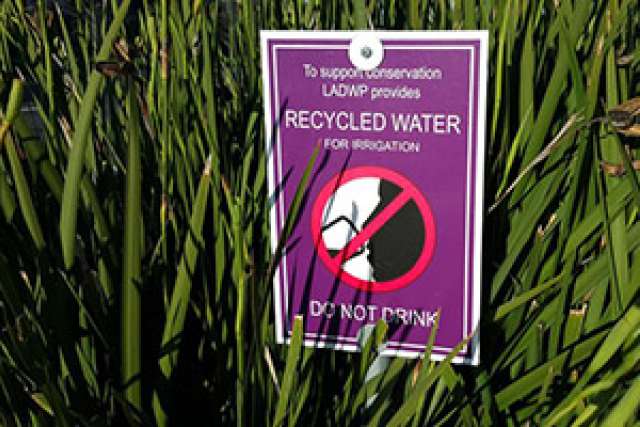 Expanding the use of recycled water would reduce water and energy use, cut greenhouse gas emissions and benefit public health in California — which is in the midst of a severe drought — and around the world.

A new study by the UCLA Fielding School of Public Health, published online March 17 in the American Journal of Public Health, found that recycled water has great potential for more efficient use in urban settings and to improve the overall resiliency of the water supply.

More than 1 in 9 people around the world, about 750 million, do not have access to safe, clean drinking water, and the problem is expected to worsen in step with rising greenhouse gas concentrations, population increases and climate change.

The study expands on a 2014 assessment in which the researchers offered recommendations for saving water while also protecting and promoting public health.

In the new report, the UCLA researchers compare California’s current water conservation efforts with two other options: banning landscape irrigation and expanding the use of alternative water sources, such as recycled water. The authors found that increasing the use of recycled water would have the greatest potential to reduce water and energy use and lower greenhouse gas emissions.

“Expansion of recycled water use has a tremendous potential to positively impact health,” said Hilary Godwin, a co-author of the study and a UCLA professor of environmental health sciences. “Recycled water is often perceived to be dirty or unhealthful, or associated with the moniker ‘toilet to tap.’ Our research helps change this conversation.”

In most of California, water has to be pumped in to meet demand, which places an extraordinary burden on the state’s other resources: About 20 percent of the energy California uses goes toward treating, transporting and heating water. The process of transporting water alone produces about 4 million tons of greenhouse gas emissions per year.

Scientists also project that continuing climate change — on top of the current drought, now in its fifth year — will only exacerbate water scarcity in the state. That could result in lower agricultural production, reduced water quality as a result of saltwater intrusion, and respiratory and cardiovascular disease caused by airborne particulate matter.

Currently, roughly 52 percent of the state’s water is used for irrigation. In some parts of the state, recycled water is used to irrigate golf courses and green spaces, but most urban areas don’t have the infrastructure to recycle water for large-scale irrigation projects. And although municipal bans on landscape irrigation have helped conserve water and energy, they can also have harmful effects, such as depleting urban green spaces where people can be active, which in turn can lead to increases in obesity and cardiovascular disease.

In addition, when the researchers analyzed water desalination — a process that removes salt and minerals from water — they found that the technique uses 50 percent more energy than importing water, and is 120 times more energy-intensive than getting water from the Los Angeles Aqueduct, which is gravity-powered.

“Of the conservation strategies we evaluated, the expanded use of recycled water had the greatest potential to reduce water and energy use and reduce greenhouse gas emissions,” said Sharona Sokolow, a doctoral candidate in the Fielding School’s department of environmental health sciences and the study’s lead author. “One health benefit of recycled water is its ability to maintain green spaces, which can lead to cleaner air, thus reducing risks for respiratory disease.”

Brian Cole, adjunct assistant professor of environmental health sciences at the Fielding School, said the strategy could be applied to water systems worldwide.

“The hope is that this research might inspire communities to consider increasing recycled water use because of the potential to have a positive impact on public health,” said Cole, a senior author of the study.

The study was supported in part by a grant from the Health Impact Project, a collaboration of the Robert Wood Johnson Foundation and the Pew Charitable Trusts.