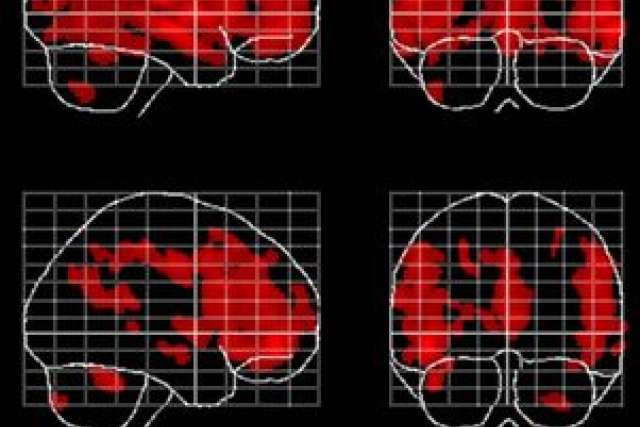 Since 1970, life expectancy around the world has risen dramatically, with people living more than 10 years longer. That’s the good news.

The bad news is that starting when people are in their mid-to-late-20s, the brain begins to wither — its volume and weight begin to decrease. As this occurs, the brain can begin to lose some of its functional abilities.

So although people might be living longer, the years they gain often come with increased risks for mental illness and neurodegenerative disease. Fortunately, a new study shows meditation could be one way to minimize those risks.

Building on their earlier work that suggested people who meditate have less age-related atrophy in the brain’s white matter, a new study by UCLA researchers found that meditation appeared to help preserve the brain’s gray matter, the tissue that contains neurons.

The article appears in the current online edition of the journal Frontiers in Psychology.

Dr. Florian Kurth, a co-author of the study and postdoctoral fellow at the UCLA Brain Mapping Center, said the researchers were surprised by the magnitude of the difference.

“We expected rather small and distinct effects located in some of the regions that had previously been associated with meditating,” he said. “Instead, what we actually observed was a widespread effect of meditation that encompassed regions throughout the entire brain.”

As baby boomers have aged and the elderly population has grown, the incidence of cognitive decline and dementia has increased substantially as the brain ages.

“In that light, it seems essential that longer life expectancies do not come at the cost of a reduced quality of life,” said Dr. Eileen Luders, first author and assistant professor of neurology at UCLA’s School of Medicine. “While much research has focused on identifying factors that increase the risk of mental illness and neurodegenerative decline, relatively less attention has been turned to approaches aimed at enhancing cerebral health.”

Each group in the study was made up of 28 men and 22 women ranging in age from 24 to 77. Those who meditated had been doing so for four to 46 years, with an average of 20 years.

The participants’ brains were scanned using high-resolution magnetic resonance imaging. Although the researchers found a negative correlation between gray matter and age in both groups of people — suggesting a loss of brain tissue with increasing age — they also found that large parts of the gray matter in the brains of those who meditated seemed to be better preserved, Kurth said.

The researchers cautioned that they cannot not draw a direct, causal connection between meditation and preserving gray matter in the brain. Too many other factors may come into play, including lifestyle choices, personality traits, and genetic brain differences.

“Still, our results are promising,” Luders said. “Hopefully they will stimulate other studies exploring the potential of meditation to better preserve our aging brains and minds. Accumulating scientific evidence that meditation has brain-altering capabilities might ultimately allow for an effective translation from research to practice, not only in the framework of healthy aging but also pathological aging.”