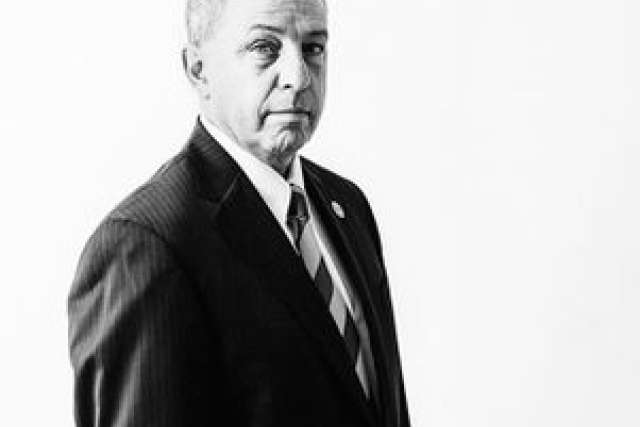 Dr. John Mazziotta, who grew up in Westchester County, New York, and attended Columbia University, planned to become an architect. But when the demand for architecture declined near the end of the Vietnam War, he switched to molecular biology and decided to go to medical school. There, he discovered a different kind of blueprint — a map of the human brain — and he was hooked. The founding director of UCLA’s Ahmanson-Lovelace Brain Mapping Center is now vice chancellor for UCLA Health Sciences and chief executive officer of UCLA Health. And he’s still in awe of the brain and its complicated choreography. He recently spoke with Mary Daily, writer and editor of UCLA Magazine.

After wanting to be an architect, what attracted you to neuroscience?
I started with molecular biology, which I found really interesting, but being in a lab was too isolating. So I went to medical school so I could also treat patients. A professor I met who was a neuroscientist had a project that I found interesting. She wanted to make 3-D reconstructions of nerve cells by tracing each section on a piece of Lucite and then stacking them up. I said, “You can do that with computers now.” I got involved with the biophysics people, who were building the first CT scanner, which didn’t require a water interface between the scanner and the subject — limiting the images to the head region. By developing a system of shutters, the rest of the body could be scanned. I was hooked on the nervous system and particularly imaging, so I decided to do neurology and ultimately brain mapping.

What makes a great brain researcher?
The same as that which makes any great scientist. You have to be curious, pay extraordinary attention to detail, look at the raw data all the time. You have to have a high threshold for frustration, because scientific research is tedious. You have to have that drive to find answers to questions that currently don’t have any.

What’s your favorite part of the brain?
The cortex, the outer surface of the cerebrum, because it’s the largest. It probably does most of the computations that result in human behavior. We don’t know why it folds the way it does, but the folding is unique to individuals, like a fingerprint. In the cortex is the basis for why people are human and for all of our behaviors.

What causes disorders like depression?
We don’t know, but it’s all about the wiring and the firing. Sometimes in different diseases you find that the structure of the brain is altered, but in mental illness, we haven’t consistently seen that. So schizophrenia, depression, bipolar illness — these are likely chemical abnormalities, functional abnormalities or something that’s wrong with the choreography of the firing and how the cells talk to one another. Most mental illnesses can be mimicked by people taking drugs, and most of them can be treated with drugs, so there must be a chemical basis.

How much progress have we made in brain imaging, and what do you hope for the future?
There’s been unbelievable progress in my lifetime. When I started in medicine, the images weren’t images of the brain but of the spaces around the brain from pneumoencephalograms, where you put air into the ventricle around the brain — a painful and unpleasant procedure — or the blood vessels from angiograms, where you could look at the arteries and veins in the head. Next came CT scanning, where you could actually see the brain and its structure, and then PET scanning and MRI scanning. We’ll continue to get better and better noninvasive information.

How would you describe the state of brain science today?
Neuroscience will be to the 21st century what physics and molecular biology were to the first and second halves of the 20th century. Everything is teed up to make neuroscience the breakthrough area of at least the first 50 years of the 21st century. But it’s a tough time to get funding from traditional sources, particularly the National Institutes of Health, and biotech and pharmaceutical companies have moved away from basic neuroscience research. At UCLA, we’ve funded significant amounts of neuroscience research philanthropically, and that’s helpful because it’s different dollars. Traditional funding is very incremental. But with philanthropic dollars, if somebody has a really great idea and it works, then the whole field advances.

What are the most important discoveries to date?
Knowledge of the microscopic and gross organization of the brain gathered over the last 150 years has been critical to understanding how things are connected and where they go. The discovery of prions — proteins that can cause diseases like Mad Cow and could be implicated in other neurodegenerative diseases. And place and grid cells — networks in the part of the brain that has to do with remembering and organizing material for recall and preservation. A third would be mirror neurons. When you watch me do something, areas in your brain mimic that, and that’s one way by which we learn. When that’s disconnected from other areas, it may cause different disorders of development, possibly autism or components of it, or other things.

What has been UCLA’s contribution to brain science?
UCLA has been a major player, one of the first to have a brain research institute. We have one of the largest neuroscience faculties anywhere — more than 500. It’s the single largest discipline on campus, and discoveries and information from that group have informed all aspects of neuroscience.

Where do you see the greatest potential for breakthroughs in the study of the mind?
We need a theoretical framework of how the brain and the nervous system work, and then we need to test those theories based on the information we have today and the experiments of tomorrow. When we bring in people who are trained as physicists or mathematicians, they bring this theoretical approach to problem solving to the science of the nervous system. So we’ve started a neurophysics program here, in conjunction with the Division of Physical Sciences. I think we’ll get a lot of interesting results out of that.

The techniques available today are just extraordinary. [Take] optogenetics, where you can engineer circuits in the brain to respond to light and fire on command with certain wavelengths of light. These kinds of methodologies will give us great insights into how the brain works and fails.

The complete story can be found in the January 2016 issue of UCLA Magazine.