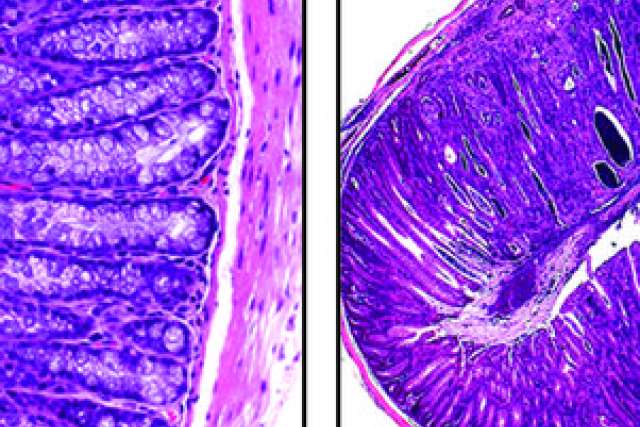 UCLA researchers were part of a team that has discovered the interplay of several genetic factors that may be involved in the development of early-onset ulcerative colitis, a severe type of inflammatory bowel disease.

The early research findings may offer new targets for prevention and treatment strategies to address the inflammation generated by early-onset ulcerative colitis.

The rare disease affects infants and young children and can lead to early development of colon cancer and an increased risk of liver damage.

Scientists from the David Geffen School of Medicine at UCLA and Pusan National University in South Korea also created a first-of-its-kind animal model that mimics early-onset ulcerative colitis and can be used to help test new drug candidates to treat the disease. Their findings are published in the current issue of the peer-reviewed journal Gastroenterology.

“We hope that identifying these key genetic factors and providing a unique research model will help lead to new approaches to treat early-onset ulcerative colitis, a devastating disease that currently has no cure,” said Dr. Sang Hoon Rhee, the study’s senior author and an associate adjunct professor of medicine in the Division of Digestive Diseases at the David Geffen School of Medicine at UCLA.

Although inflammatory bowel disease can occur at any age, approximately 25 percent of cases develop in people 18 years or younger, some of whom have early-onset ulcerative colitis. Those who develop the disease at such a young age are at a higher risk of developing colon cancer. They also have an increased risk for liver damage because the inflammation caused by the disease leads to a narrowing of the bile ducts that connect to the liver.

Previous studies had shown that the activity of a strong anti-inflammatory protein called interleukin 10, which cools down the inflammatory responses in the body, is diminished in people with early-onset ulcerative colitis.

“We knew that interleukin 10 played a role,” said Dr. Eunok Im, an assistant professor at Pusan National University’s School of Pharmacy and the study’s first author. “But recent clinical and experimental evidence indicated that in addition to this protein’s crippled action, there may be other genetic factors at work causing early onset of this disease.”

The team found that phosphatase and tensin homologue (PTEN), a protein that plays an important role in cell functions like growth and communication, might also work in concert with interleukin 10 in helping ulcerative colitis to develop.

Scientists also discovered that, among mice that do not have interleukin 10, the additional loss of the PTEN gene in the intestine caused extensive inflammation, severe colitis and colon cancer development at very early ages — as early as one month after birth — and that they develop symptoms and early-onset ulcerative colitis in much the same way that humans do.

As a result, according to researchers, those mice may be an invaluable tool for testing possible new treatments for ulcerative colitis.

The team also found that the loss of Pten in the intestine disrupted antibacterial activity and altered the colon’s bacterial diversity. There was a large increase in a specific group of bacteria called Bacteroides, which have the ability to trigger massive inflammatory responses that cause various inflammatory diseases.

Using both genetic and pharmacological interventions, the researchers inhibited the Bacteroides’ ability to trigger inflammatory responses, which greatly reduced the occurrence of early-onset ulcerative colitis in the mice. The results could eventually point the way toward new approaches to treat or prevent ulcerative colitis in humans.

“Future study may help us better understand how this bacteria has the potential to elicit inflammation in the colon and explore the molecular mechanisms of how the bacteria impacts disease onset,” said Dr. Charalabos “Harry” Pothoulakis, another author of the study and a professor of medicine in the division of digestive diseases. Pothoulakis holds the Eli and Edythe L. Broad Chair in Inflammatory and Bowel Disease at UCLA and is the director of the UCLA Center for Inflammatory Bowel Diseases.

The study’s other author was Jane Jung, a researcher in the division of digestive diseases at UCLA.

The study was supported by the National Institutes of Health and by grants from the National Research Foundation of Korea.