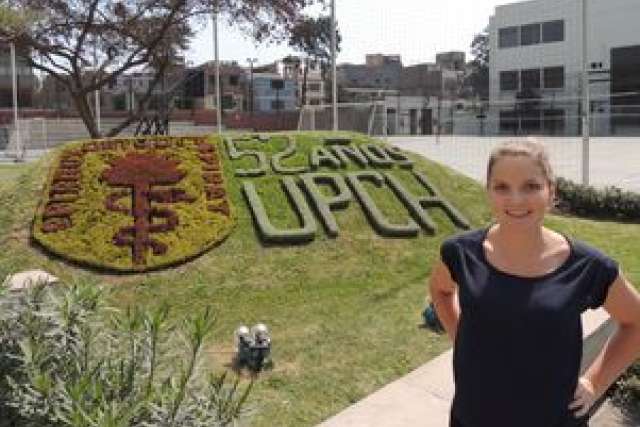 A research project supported by UCLA’s Blum Center for Poverty and Health in Latin America is contributing to efforts in Peru to make this happen.

Claire Bristow, a UCLA Ph.D. student in public health who conducted research in Peru, and Rebecca Foelber, a master’s student in public health who worked in Brazil on another project, will present their research on behalf of the center at its Second Annual Spring Conference May 6-7 at UCLA’s De Neve Auditorium. Bristow and Foelber were selected for the Blum center’s inaugural Summer Scholars Program.

Conference participants, who include UCLA students, faculty and staff as well as policy and health professionals from 10 Latin American countries, will discuss the latest research on health and poverty in Latin America. The conference will also highlight solutions and projects such as Bristow’s.

"The Summer Scholars Program was developed for students to examine how poverty, government practices and policies, and other factors impact poor health in Latin America," said Dr. Michael Rodriguez, Blum center director. "More importantly, the scholars’ research can lead to better health practices and solutions in a region that is so desperately in need of them."

Bristow spent last summer in Lima, Peru, where she developed a study that asked people in these high-risk groups what type of HIV and syphilis testing they would prefer.

Identifying whether a person has HIV or syphilis can help prevent sexually transmitted diseases (STDs) from spreading, Bristow noted. Once diagnosed, HIV requires constant care, but just one shot of penicillin can cure syphilis.

Bristow decided to focus her study on men who have sex with men because they have higher HIV infection rates than the general population. According to a past study conducted at a Peruvian community clinic, nine percent of the men in that group had undiagnosed HIV, compared with nearly three percent of other clinic patients. Seven percent of men in the high-risk group had syphilis.

Statistics for transgendered women, who often work in the sex trade, also show high rates of STDs, including 30 percent for HIV and 23 percent for syphilis.

For Bristow’s study, transgendered women and men who have sex with men were asked to fill out a survey that included different testing scenarios. Would they prefer to be tested and find out immediately if they had syphilis and needed further testing for HIV? The downside of that scenario is that immediate results could produce a "false positive." Or would they like to be tested free if they could get the results a week later? Under this scenario, the results a patient received would be the most accurate.

The majority of the patients treated at a sexual health clinic run by Universidad Peruana Cayetano Heredia, a Peruvian university, said they preferred the free option with the most accurate results.

"People really value costs and accuracy of test results; somewhat secondary to that is timeliness," said Bristow, who has also conducted research on STDs in Africa. "So they were willing to wait a week for test results if it meant that the test was free and accurate."

Public health officials in Peru can now use the results to help them tailor testing so that these high-risk groups will more likely be tested, said Bristow, who plans to focus her dissertation on HIV and syphilis.

Graduate student Rebecca Foelber conducted her research in Rio de Janeiro, Brazil, at the Pan American Health Organization offices. Her research project examines the most common parasites that cause foodborne illnesses in Latin America and the Caribbean.

Although there are occasional media reports of outbreaks of foodborne illnesses in various Latin American countries, Foelber said data on how often these outbreaks occur aren’t readily available.

"Parasites tend to disproportionately affect people in poverty," said Foelber, a veterinarian who plans to work in the field of veterinary public health. "These parasites are easily transmitted in conditions of poor sanitation and hygiene."

"For example, people might use dirty water to wash fruits and vegetables because they have no access to clean water," she added.

At the conference, Foelber will discuss the methodology she used, which was based on one used by the World Health Organization and Food and Agriculture Organization of the United Nations. By collaborating with other experts, she plans to rank foodborne parasites according to the diseases they cause in the region, their economic impact and other issues.

"Learning which foodborne parasites are most prevalent in a region can allow decision makers to prioritize disease prevention efforts," she added.

For more information about the conference, click here. Registration is open until Tuesday, April 29.