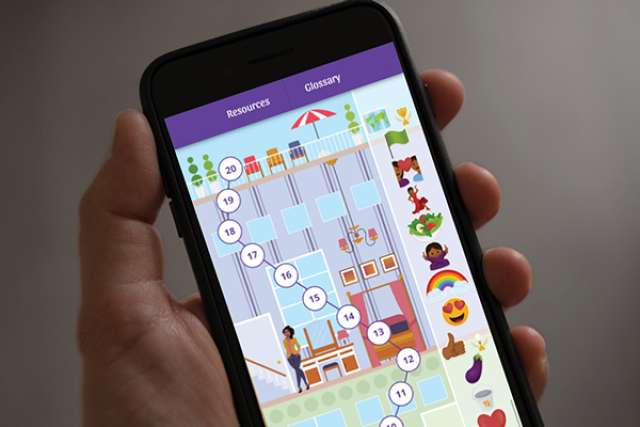 The study will enroll 5,000 young transgender women between the ages of 16 and 29 who are unable to participate in face-to-face interventions due to geographic and socioeconomic barriers.
March 9, 2021
Estimated read time: 4 minutes

A team of researchers co-led by UCLA Fielding School of Public Health epidemiology professor Matthew Mimiaga has received an $8.8 million grant from the National Institute of Allergy and Infectious Diseases to conduct a nationwide study aimed at reducing the spread of HIV, the virus that causes AIDS, among young transgender women through the use of a mobile app.

The app, LifeSkills Mobile, allows high-risk women who are unable to participate in face-to-face interventions due to geographic and socioeconomic barriers to easily access comprehensive HIV prevention information and strategies through their mobile devices. The five-year project will gauge how well the mobile intervention improves health outcomes among its users.

While past decades have seen significant advances in HIV research and treatment, the pandemic continues to outpace efforts to control it, and there is an urgent need for interventions among younger transgender women, whose infection rates are particularly high, said Mimiaga, director of the Fielding School's UCLA Center for LGBTQ+ Advocacy, Research & Health, or C-LARAH. He is a principal investigator on the project, along with professors Lisa Kuhns of Northwestern University and Marvin Belzer of the University of Southern California.

"The constant and unrelenting exposure to gender minority stigma, compounded by the psychosocial challenges associated with social disadvantage and economic marginalization, exacerbates disparities in HIV incidence among young transgender women," Mimiaga said. "This can lead to behaviors such as substance use, sex work, health care avoidance and others that increase HIV acquisition risk."

"For this study, we are partnering with transgender-specific organizations for maximum impact," said Belzer, a professor of pediatrics and medicine at USC's Keck School of Medicine and head of the adolescent medicine division at Children's Hospital Los Angeles. "Given that this population is a high-risk group for HIV infection and face numerous transgender-specific barriers to consistent condom use and pre-exposure prophylaxis linkage and uptake, they represent a group in great need of effective strategies to decrease HIV incidence."

LifeSkills Mobile is a fully adapted version of a group intervention that is delivered in person, called Project LifeSkills, which has demonstrated efficacy in reducing HIV risk among this population. That work was led by Robert Garofalo, chief of The Potocsnak Family Division of Adolescent and Young Adult Medicine at the Anne & Robert H. Lurie Children's Hospital of Chicago and professor of pediatrics at Northwestern University's Feinberg School of Medicine, and Sari Reisner, an assistant professor of medicine at Harvard Medical School and director of transgender research at Brigham and Women's Hospital in Boston. Mimiaga and Kuhns also worked on the original project, which was supported by the National Institute of Mental Health. Garofalo and Reisner, in turn, are also investigators on the LifeSkills Mobile project.

"Project LifeSkills is currently the only 'best evidence' HIV risk-reduction intervention for young transgender women included among the Centers for Disease Control and Prevention's compendium of evidence-based HIV interventions," said Kuhns, associate director of the Center for Gender, Sexuality and HIV Prevention at Lurie Children's Hospital. "The new funding has the potential to scale this intervention widely via mobile devices, extending access to many hard-to-reach and high-need young transgender women who experience barriers to participating in a face-to-face intervention."

The study will enroll 5,000 young transgender women ages 16 to 29 recruited online who will be split into three regional groups — eastern, central and western — depending on where in the U.S. they live, with each group administered by researchers from one of the three partner universities. The efficacy of the program will be assessed by comparing the incidence of HIV infection among participants over the course of the project to infections among individuals randomized to a standard-of-care condition.

The benefit of the LifeSkills Mobile intervention, the researchers stress, is that it addresses HIV risk within the context of each participant's life; it is accessible enough to reach at-risk participants, including those in rural areas, at times that are most convenient for them; and it is highly sustainable and low cost.