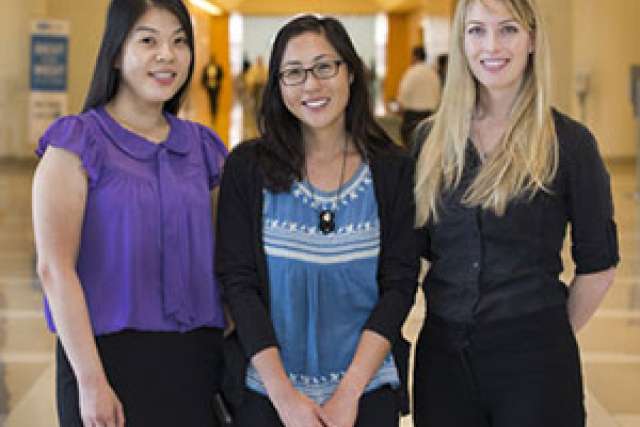 Harry Winston, Inc., the international fine jeweler and watchmaker, and the UCLA Children’s Discovery and Innovation Institute have named the new recipients of the 2015-2016 Harry Winston Fellowships.

The fellowships support the work of young pediatric physician-scientists from UCLA Mattel Children’s Hospital who are conducting research to prevent, treat and cure disease and illness in children.  Harry Winston, Inc. donated a five-year, $1 million contribution to launch the fellowship program last year.

“As we enter our second year of partnership with the UCLA Children’s Discovery and Innovation Institute, we are honored to introduce the three new Harry Winston Fellows for the 2015-2016 academic year, and to support their vital contributions in the field of pediatric medicine,” said Nayla Hayek, CEO of Harry Winston, Inc.  “Through their innovative research and groundbreaking advancements, it is our hope that the extraordinary work of these young physician-scientists will continue to pave the way for a brighter, healthier future for all children worldwide.”

The Harry Winston Fellows represent physician-scientists in their second or third year of fellowship at UCLA (a period of specialized training following a doctor’s residency) who have demonstrated a commitment to a career in academic medicine.  The Fellows, who have all shown unparalleled excellence in clinical and research skills, are also extremely bright, exceptionally hardworking and driven by a desire to make a significant difference in their field.

Harry Winston Fellows are chosen annually by an internal selection committee led by Dr. Sherin Devaskar, the Mattel Executive Endowed Chair of the department of pediatrics at UCLA Mattel Children’s Hospital and executive director of the UCLA Children's Discovery and Innovation Institute.

“We are excited to name our second group of Harry Winston Fellows.  These are some of the best and brightest subspecialty physicians who will go on to become exceptional academic physician-scientists,” said Devaskar. “We are grateful to Harry Winston, Inc. for supporting their training and we can all look forward to seeing the contributions they will make in the field of medicine.”

Dr. Claire Baldauf, a second year fellow in the division of neonatology and developmental biology. Baldauf’s research focuses on neurodevelopment and brain biology. She is specifically interested in intra-uterine growth restriction (IUGR), where poor fetal growth results in an inability of the fetus to meet its genetic potential.  The condition is a major risk factor for neurodevelopmental outcomes including intellectual disability, cerebral palsy and emotional and behavioral disorders. Her project examines the changes that take place in a brain exposed to growth restriction and determines if damaged neurons can be rescued.  Using a mouse model, she will investigate whether a peptide called Humanin, shown to have neuroprotective effects in other types of brain disease such as Alzheimer’s, could also benefit the damaged neurons of IUGR babies. Baldauf said she is drawn to a career as a physician scientist because engaging in research deepens the understanding behind clinical decision making while patient care keeps her focused on questions that need answers to improve health outcomes.

Dr. Jina Lim, a third year fellow in the division of neonatology and developmental biology. Lim’s research is on how the aortic valve controls the flow of blood from the heart to the body. When that valve becomes damaged, it can be replaced with a prosthetic valve. But in children, a prosthetic valve can rapidly become calcified—hardened—making it stiff and disrupting blood flow to the body. Since this can lead to heart failure and death, the condition requires repeated heart surgeries and further valve replacements.  The most common valve disorder causing calcification is calcific aortic valve disease (CAVD). Lim will examine one particular protein, growth arrest specific 6 (Gas6), which is known to be involved in injury repair and cell survival to establish the role it may play in aortic valve disease. Because there are currently no medical therapies for treating CAVD, understanding its underlying causes may lead to the prevention or cure of CAVD, including delayed bioprosthetic valve calcification.

Dr. Emily Whang, a second-year fellow in the division of pediatric gastroenterology. As a pediatric GI fellow, Whang has witnessed first-hand the effects of inflammatory bowel disease (IBD) on her patients.  For pediatric patients, it is an incredibly debilitating disease, as well as a socially isolating one that often leads to poor quality of life and depression. The cause of IBD is unclear, which makes finding a cure so difficult.  For this reason, Whang plans to focus her research on the disease process to further the development of new treatment therapies.  In particular, she will investigate the role of vasoactive intestinal peptide and its receptors in mucosal inflammation. Her hope is to develop novel and significant contributions to the understanding of the molecular physiology of colitis and inflammatory bowel disease and ultimately develop new, therapeutic strategies to treat this devastating illness in the pediatric patient population. Whang said she is excited to combine her love of basic science to develop her scientific skills and critical thinking as a physician-scientist to answer future questions that may arise in her clinical pediatric IBD practice.

The new Fellows will be formally announced at a reception held in Los Angeles on October 15.

The UCLA Children’s Discovery and Innovation Institute fosters multidisciplinary collaborations among faculty and trainees fosters a healthy future for children through transformative research.  The institute works to pioneer advancements in pediatric medicine in the following initial four core areas of research: brain, behavior and development; nutrition, metabolism and growth; cancer and regeneration; and infection, inflammation and immunity.

About Harry Winston:
Supporting local communities and giving hope to those in need is a longstanding Harry Winston tradition that began with its founder.  Today, the company continues this legacy of giving through The Harry Winston Brilliant Futures™ Charitable Program, which supports organizations that strive to give young people access to a quality education, the skills necessary to be successful in life, and enable healthy futures.  Founded in New York City in 1932, Harry Winston operates retail salons worldwide in locations including: New York, Beverly Hills, London, Paris, Genève, Tokyo, Hong Kong and Shanghai.