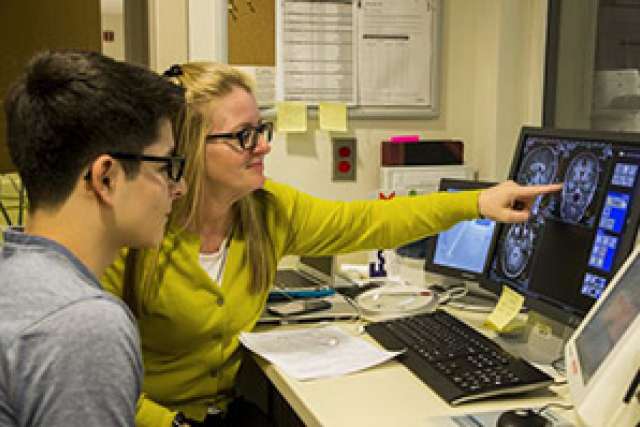 You can adopt a child,  a pet or even a stretch of highway. But students at one local high school decided recently to adopt a research project run by UCLA School of Nursing assistant professor Nancy Pike.

Pike has a grant from the National Institutes of Health to study memory loss and brain structural changes in adolescents born with single ventricle congenital heart disease, or, in other words, with only one pumping chamber instead of two. Congenital heart disease (CHD) is the No.1 birth defect in the nation, according to the March of Dimes. Twice as many children die from congenital heart defects each year than from all forms of childhood cancer combined. Children with CHD have an abnormally structured heart and/or blood vessels coming from the heart. These hearts may have incomplete or missing parts.

Since she started studying this disease two years ago, Pike has been searching for two sets of subjects — young people who have a single ventricle due to CHD and others without CHD who can serve as healthy controls. The subjects who have heart disease are, for the most part, referred to her by cardiologists or recruited from cardiology clinics that know about her study. Healthy controls are found via a wide variety of sources — fliers, word of mouth, advertising or siblings of CHD patients.

This past January, Pike tested Allison Houser, a 14-year-old high school student who was born with single ventricle heart disease. As it turned out, Leslie Miller, the girl’s mother and a teacher at an all-girls Catholic high school in La Cañada Flintridge, thought her students might be willing to participate in the study as healthy controls.

Miller told her students at Flintridge Sacred Heart Academy as well as the journalism teacher about the study and how it could really help her daughter. Miller thought students would benefit from understanding that you don’t need to be sick to participate in research and by participating, you are performing a community service.

What happened next was a researcher’s dream come true.

Almost immediately, Pike started receiving calls from students asking to be considered for one of two studies where she is enrolling healthy controls. One student, the editor of the school newspaper, wanted to participate in the study and then write an article about the experience. Ultimately, the students decided to make Pike's research as well as the subject of congenital heart disease their school service project for the month of February, which happened to be Congenital Heart Disease Awareness Month.

“I never expected that the students would get so engaged about a disease they knew so little about,” said Pike. “But seeing how CHD had impacted their teacher really motivated the students to get involved.”

Some of the participating students were asked to take a memory recall test. Others, who served as healthy controls, had both memory testing and a brain MRI scan.

As it turned out, the students got a lot more than just monetary compensation for participating. They recounted their experiences in a two-page feature in their school newspaper, Veritas Shield.

Monica Collins, who was the healthy control matched with Miller's daughter, had a real sense of pride about being a research subject. She is interested in a career in the medical field and wanted to see how research studies are conducted as well as to learn more about CHD.

“It was interesting to take part in something that is going to help others and further the scientific research of congenital heart disease,” said Collins.

Another participant, who heard about the study from his sister, participated because CHD hit close to home. As it turned out, his older brother was born with single ventricle heart defect and died shortly after birth.

The students also decided to raise funds for CHD and donated more than $300 to Children’s Hospital, Los Angeles, where Allison had her previous heart surgeries.

A school community gives back

Pike said she was very touched by the students’ keen interest in the project and the way they rallied to support a teacher they loved.

“I hadn’t thought of this type of venue for subject recruitment because some schools do not allow study advertisement,” the researcher said. “But what worked for me and this study was the students turning this into a service project.”

What’s even better is that now she has a waiting list of healthy control subjects that she can draw on in the future. But there’s only one problem, Pike said. “It’s an all-girls school, and now I need boys!”