The force is with 24-year-old woman, a longtime fan of "Star Wars" 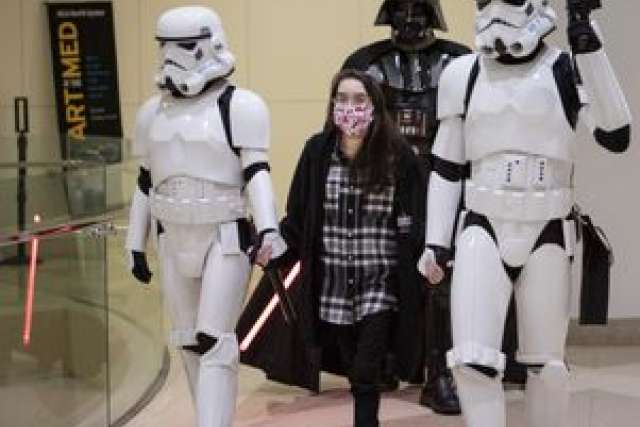 A 24-year-old cystic fibrosis patient is starting the new year with new hope thanks to help from the U.S. Air Force, the actor who played Chewbacca in the “Star Wars” movies and a UCLA surgeon who said yes to a high-risk case.

Kathlyn Chassey of San Antonio, Texas, was born with cystic fibrosis, a genetic disease characterized by the build-up in the lungs of thick, sticky mucus that traps infection-causing bacteria. While there is no cure, lung transplantation can help alleviate many of the symptoms.

Chassey’s father, Chris, is a chief master sergeant in the United States Air Force. Last November, when her breathing problems worsened, she was hospitalized at the Brooke Army Medical Center in San Antonio. By the end of the month, her condition became critical, and she was placed on life support to take over her breathing function.

The only chance of saving her life, doctors warned, was a lung transplant.

An urgent search began to find a transplant center that would take her case. But one center after another turned her down, deeming the surgery too risky.

With time running out, Chassey’s family desperately needed help spreading the word. Friends quickly developed a website and social media campaign. As members of the "Star Wars" fandom, the family turned to longtime friend, actor Peter Mayhew — Chewbacca from the films — whom Chassey befriended at a convention when she was 7. The family asked Mayhew to help spread their message on social media.

That’s how the UCLA lung transplant program heard about the young woman in Texas. The program has a history of accepting high-risk patients and, after consulting with Chassey’s doctors, they agreed to evaluate her for a transplant.

“Given her youth, her determination and the fact that we have the resources and experience at UCLA to offer this life-saving therapy, we felt it was our obligation and duty to provide her with a chance for transplant,” said Dr. Abbas Ardehali, surgical director of the UCLA Heart and Lung Transplant Program.

That's when the U.S. Air Force’s 59th Medical Wing jumped into action. On Dec. 12, their skilled team flew Chassey from San Antonio to Los Angeles on a military C-130J Super Hercules transport aircraft that was large enough to accommodate the extensive medical equipment and a team of 20 people, including medics, flight crew and family members during the four-hour flight.

Over the next few days, the lung transplant team evaluated Chassey and officially listed her for transplant on Dec. 16.

As Chassey and her family waited for an organ donor, the Peter Mayhew Foundation, an charitable organization founded by the actor, began collecting donations and managing a collectibles auction to raise money to help cover the costs associated with relocating to Los Angeles.

Around Christmas, Chassey and her family received good news: A donor had been found. Chassey's surgery went smoothly, and her post-operative recovery has gone  well.

Chassey and her parents said they are grateful to the military hospital and UCLA transplant team that kept her alive, and for the ongoing support of the Star Wars fan community.

“It takes one doctor to take a chance and say 'yes,' and that’s what I got,” said Chassey. “Dr. Ardehali is my hero. It’s a miracle, and I am very blessed.”

On Wednesday, Jan. 11, Chassey walked out of the hospital, escorted by three Star Wars characters.

See a Facebook video taken by Julieann Chassey of her daughter's "Star Wars" escort from the hospital.