How airway cells work together in regeneration and aging 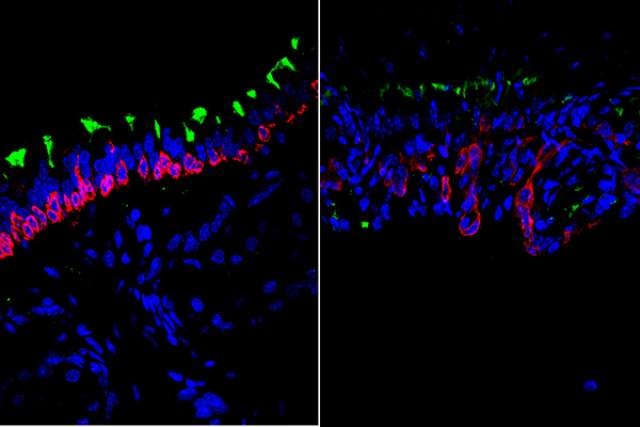 Researchers at the Eli and Edythe Broad Center of Regenerative Medicine and Stem Cell Research at UCLA have identified the process by which stem cells in the airways of the lungs switch between two distinct phases — creating more of themselves and producing mature airway cells — to regenerate lung tissue after an injury.

The study, published in Cell Stem Cell, also sheds light on how aging can cause lung regeneration to go awry, which can lead to lung cancer and other diseases.

"There currently are few therapies that target the biology of lung diseases," said Dr. Brigitte Gomperts, a professor and vice chair of research in pediatric hematology-oncology at the UCLA Children’s Discovery and Innovation Institute and the paper's senior author. "These findings will inform our efforts to develop a targeted therapy to improve airway health."

The airways, which carry the air that is breathed in from the nose and mouth to the lungs, are the body's first line of defense against airborne particles — like germs and pollution — that can cause illness.

Two types of airway cells play a vital role in this process: mucus cells, which secrete mucus to trap harmful particles, and ciliated cells, which use their finger-like projections to sweep the mucus-engulfed particles up to the back of the throat, where they can be cleared out of the lungs.

The infectious or toxic particles that people breathe in every day can injure the airways and when that happens, airway basal stem cells — which are capable of self-renewing and producing the mucus and ciliated cells that line the airways — activate to repair the damage.

"These stem cells have to maintain a really delicate equilibrium" said Gomperts, who is also co-director of the cancer and stem cell biology program at the UCLA Jonsson Comprehensive Cancer Center. "They have to produce just the right amount of mucus and ciliated cells to keep harmful particles out of the lungs, but they also have to self-replicate to ensure there will be enough stem cells to respond to the next injury."

In the new study, the researchers examined mice with lung injuries, analyzing how the different types of cells found in the niche — the supportive environment that surrounds airway basal stem cells — work together to orchestrate the repair response.

In the proliferation phase of repair, a connective tissue cell called a fibroblast secretes the Wnt molecule, which signals to the stem cells that it's time to self-renew. In the differentiation phase of repair, the Wnt molecule is secreted by an epithelial cell, which make up the lining of tissues and organs, to signal to the stem cells that it’s time to produce mature airway cells.

Understanding how regeneration occurs in healthy lungs is a critical first step to understanding how disease can arise when the process goes wrong. Seeking insights into what role this process and the cells that activate it might play in disease, the scientists studied its activity in older mice.

"We were surprised to find that in the aging airways, the Wnt/beta-catenin signaling pathway is active in the stem cells even when there is no injury, in contrast to the young airways where it is only activated when necessary," said Cody Aros, the paper's first author, a UCLA medical student who recently completed his doctoral research. "When this pathway is active, it stimulates the stem cells to produce more of themselves and more airway cells — even if they're not needed."

Previous research by Gomperts' lab has established a link between a more active Wnt/beta-catenin pathway and lung cancer.

"The more a cell divides, the more likely it is that a proofreading error or mutation can occur and lead to cancer," Gomperts said.

The new paper builds on that work by establishing not just what goes wrong but precisely when it goes wrong in otherwise healthy people as part of the aging process.

"These findings give us insight into which cell types are important, which pathway is important and when we might want to think about intervening with therapies to prevent the formation of cancer," Aros said.