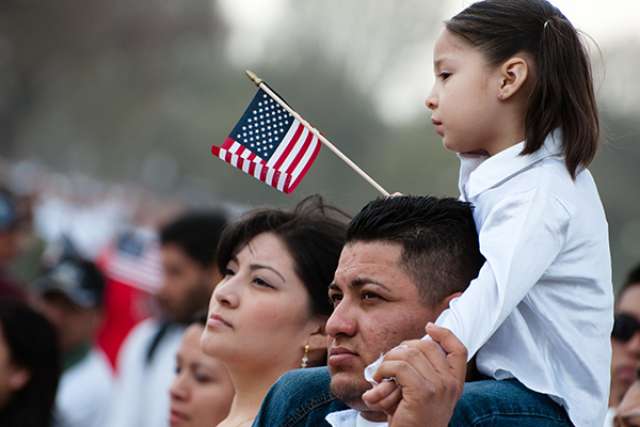 "Policies that sow fear and confusion around immigration status contribute to the avoidance of public programs, which can have serious implications for health and well-being," said study author Susan Babey.

Immigration policies like the Trump-era expansion of the "public charge" rule that made it harder for immigrants on public assistance to obtain legal residency can have a chilling effect on the health and well-being of immigrant communities in California, according to a study released today by the UCLA Center for Health Policy Research.

The study, based on data from the center's 2019 California Health Interview Survey, shows that 1 in 4 low-income immigrant adults in the state have avoided accessing public assistance like health, food or housing programs at some point for fear of jeopardizing their own or a family member's immigration status. More than half of them indicated they had shunned these programs in the time between the Trump administration’s proposed rule changes in 2018 and their implementation in 2020.

The new public charge legislation penalized immigrants who rely on Medicaid, food stamps or housing vouchers — even for short periods — by decreasing their chances of getting a "green card," or lawful permanent residency.

Immigrants' avoidance of these public programs was linked to worse access to health care and higher food insecurity, the researchers say. They found that among California immigrants who had reported avoiding programs over the past year, 37% were uninsured and 54% were food insecure, compared with 16% and 36% of immigrants who didn't avoid them.

In addition, those who had avoided public programs in the past year were twice as likely as those who hadn't to report delays in receiving needed medical care and prescription medication, as well as not receiving mental health treatment — all of which suggest negative health outcomes for this group.

Surprisingly, the authors also found that the proposed public charge changes seemed to have an adverse impact on immigrants who weren’t even subject to the rule. More than one-quarter, 27%, of those who were already lawful permanent residents reported avoiding public assistance programs.

"Policies that sow fear and confusion around immigration status contribute to the avoidance of public programs, which can have serious implications for health and well-being," said a href="https://healthpolicy.ucla.edu/about/staff/pages/detail.aspx?StaffID=211" target="_blank" title="Susan Babey">Susan Babey, a senior research scientist at the center and the study's lead author. "Programs like Medi-Cal and CalFresh, for food assistance, serve as a crucial safety net for California families, and inclusive policies that provide access to public programs could help protect the health of Californians, particularly during a pandemic."

While in February 2021 President Biden called for an immediate review of the public charge rule and the Supreme Court agreed to take up a case challenging the legislation, the researchers noted that complex and sometimes confusing immigration policies have long prevented eligible immigrants from seeking public assistance.

Although this is true for many segments of the immigrant community, avoidance was found to be particularly high among noncitizens who are not permanent residents (42%), those between the ages 18 and 34 (34%), Latinos (30%), those who are married with children and single with children (36% and 32%) and those who do not speak English well (29%).

The study data adds to the evidence of how the public charge rule, in particular, had a negative impact on immigrant communities and forced individuals to make tough choices about their health and well-being — choices made even more difficult by widespread uncertainty about which public assistance programs were included, who the rule applied to and how it might affect citizenship applications.

"The findings suggest the crucial need to provide accurate and easy-to-understand information about immigration rules and the impact they may have on public health," said Ninez Ponce, director of the center and a co-author of the study.

The authors say that information campaigns led by legal and advocacy organizations, with resources available in various languages, can help immigrants overcome misinformation and confusion related to immigration policies. They also recommend avoiding policies — and reversing existing policies — that negatively impact participation in health and food programs that serve as important safety nets for Californians.

"California is home to over 10 million immigrants and about a quarter of the immigrant population in the U.S., more than any other state in the nation," Ponce said. "The COVID-19 pandemic, fraught with catastrophic life events and economic loss, further amplifies the need to preserve vital services for all residents"