How is ovarian cancer detected? 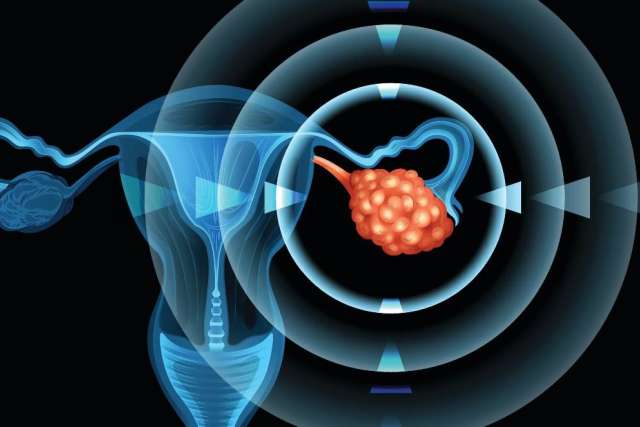 October 31, 2022
By uclahealth
Estimated read time: 5 minutes
Cancer screening is a normal part of a woman’s health plan. Pap smears, mammograms and colonoscopies all offer a way to detect cancer early — when it’s most treatable.

But there is no regular screening for ovarian cancer, the fifth-deadliest cancer among women. Of the almost 20,000 women diagnosed with ovarian cancer yearly, more than 12,000 will die from the disease.

“Ovarian cancer screening continues to be the focus of investigators globally,” says UCLA Health gynecologic oncologist Beth Karlan, MD. “But one thing women can do today is to take action toward prevention and reducing risk.”

Here’s what you need to know:

Can ovarian cancer be detected early?

“If you are symptomatic, there are techniques currently being used, such as transvaginal ultrasound and the CA-125 blood test,” Dr. Karlan says. “But they can’t reliably detect ovarian cancer at an early stage. Even if they find it a bit earlier, studies show that it doesn’t necessarily reduce the mortality rate.”

Ovarian cancer is often asymptomatic in its early stages. Even when signs are present, they aren’t always obvious. But women should be familiar with the symptoms of ovarian cancer and all gynecologic cancers. For most cancers, being proactive in finding out what’s causing the symptoms may result in an earlier diagnosis and a better prognosis.

The symptoms of ovarian cancer include:

Take your symptoms to a gynecologist, who may be more likely to explore the possibility of ovarian cancer. “Do not ignore symptoms that are persistent and progressive,” Dr. Karlan says. “Even if it’s only been two weeks, it’s worth calling your doctor.”

The most significant risk factor for ovarian cancer is family history or heredity. Mutations in certain genes increase the risk, such as breast cancer gene 1 (BRCA1), breast cancer gene 2 (BRCA2) or a gene associated with Lynch syndrome (a hereditary condition that increases the risk of many types of cancer). Women with a BRCA1 mutation have a 35% to 70% lifetime risk of ovarian cancer. The risk with a BRCA2 mutation is 10% to 30%.

“You need to know the health history on both sides of your family,” Dr. Karlan says. “Family health history is the greatest risk factor, and you’re just as likely to inherit a gene associated with ovarian cancer from your father as your mother.”

But genetic mutation is only one risk factor for ovarian cancer. Other risk factors include:

Prevention is vital for ovarian cancer, especially since reliable screening is not yet established.

“Never getting cancer is even better than curing cancer or finding it early,” Dr. Karlan says. She recommends two ways women can be proactive to reduce risk and prevent ovarian cancer:

If you are high risk or are done having children, Dr. Karlan says taking out the fallopian tubes is an effective way to reduce the risk of ovarian cancer. Removing both the ovaries and fallopian tubes offers a higher risk reduction (90% or more). But women at a young age may be concerned with the health effects of removing the ovaries, which causes an early menopause and symptoms that can include vaginal dryness, decreased sex drive, hot flashes and osteoporosis. An alternative is removing the fallopian tubes and delaying ovary removal.

You can reduce the risk of ovarian cancer by preventing regular ovulation. Each time the body ovulates, the process of releasing the egg can damage and stress normal cells within the fallopian tubes.

There are two ways to reduce ovulation:

“Women can be empowered by knowledge to take an active role in their health and health care,” Dr. Karlan says. “We put our families and others before us all the time, but we need to take care of ourselves as part of taking care of others.”

If you have symptoms of ovarian cancer or want to assess your risk, reach out to your gynecologist or a gynecologic oncologist.