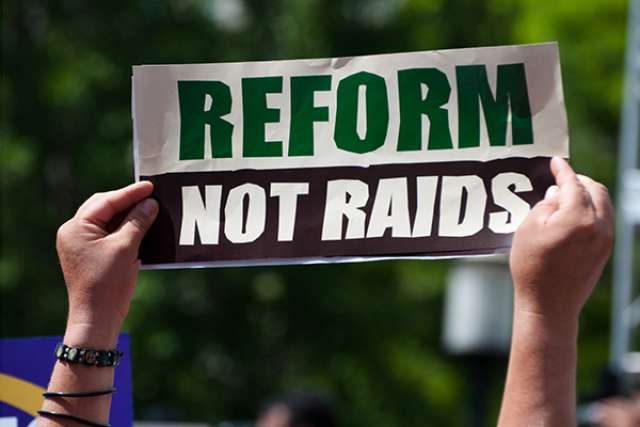 The public health evidence shows that policies that exclude noncitizens from critical government resources have been bad for the well-being of immigrants in the United States.
February 23, 2021
Estimated read time: 7 minutes

President Joseph Biden and the Democrat-controlled Congress have started boldly with immigration. On Feb. 18, Democrats introduced the U.S. Citizenship Act of 2021, which would rollback many of Donald Trump’s policies and bring comprehensive immigration reform, including a pathway to citizenship for the estimated 10.5 million undocumented immigrants in the United States. Researchers and community advocates are recognizing a renewed opportunity to use public health research and advocacy lenses to inform the dialogue — and ultimately the policies — surrounding immigration reform.

In this Q&A, Steven Wallace, associate director at the UCLA Center for Health Policy Research and a professor of community health sciences at the Fielding School of Public Health, and his colleague Maria-Elena Young, a faculty associate at the center and assistant professor of public health at UC Merced, shared their recommendations to promote inclusive policies influenced by the public health mission to ensure the health and well-being of all people.

Wallace’s interest in immigration comes from listening to his grandfather’s stories about coming to the U.S. through Ellis Island, and his father’s memories of growing up in the immigrant neighborhood of Boyle Heights. An undergraduate summer internship in 1977 at a community health center where most of the patients were recent immigrants from Mexico sparked his interest in a more academic study of immigration, and since the mid-1980s he has published regularly on the subject.

For Young, immigrant inclusion has been central to her personal and professional experiences. Her mother’s family came to the U.S. from Nicaragua in 1950 and faced many challenges, but also economic and educational opportunity. As a youth in California, she observed the fear and division that resulted from the passage of Proposition 187. She became specifically focused on issues of immigration policy about 10 years ago when rules enacted under the Obama administration sharply increased deportations and she realized how immigration policy is a form of health policy.

They recently co-authored an editorial in the American Journal of Public Health, which outlines priorities for the new administration in taking an equity-focused approach to reform, as well as making the call to action for researchers and advocates to work together with the goal of improving immigrant health and policies.

What is the relationship between immigration and health, and why is it crucial in the current talks about immigration reform?

Wallace: “Immigrant” is a political status given to those who move their primary residence from Vancouver to Seattle, or Tijuana to San Diego, but not to those who move from Boston to L.A. Depending on how people move their permanent residence they are subject to different sets of social and political pressures and resources that will impact their health. For example, according to an analysis of the California Health Interview Survey, an estimated 90% of undocumented immigrant adults ages 19-64 did not have comprehensive health insurance because they are in families with low-wage workers who are not provided insurance at work and they do not qualify for public programs. Even documented immigrants who live in families that include undocumented members — called mixed-status families — often report not obtaining benefits or seeking care they are eligible for because of their concerns about putting their undocumented family members at risk. And the chronic stress these families live under has negative health outcomes.

Young: The relationship between immigration and health is critical to current policy proposals because immigrants’ day-to-day experiences are shaped by immigration policies. Today, immigrants are less likely to have a place to receive health care — and the insurance to pay for that care — and more likely to work in low-wage, and often less safe jobs, than those born in the U.S. Across the U.S., they also report experiencing xenophobia and discrimination due to race, religion, citizenship and other factors.

We know that having access to health care, economic opportunities, educational advancement and living free of racism and discrimination are key determinants of good health. Federal, state and even some local policies have an enormous impact on whether immigrants are able to access those resources and protections and the extent to which they may be targeted by enforcement. Unfortunately, over time policymakers in the U.S. have largely created a system that excludes many noncitizens from critical resources and actively authorized their policing and surveillance. The public health evidence shows that this policy approach has been bad for the well-being of immigrants and people of color across the nation. There’s an opportunity to start to change that now.

Wallace: State and local policies on education, health care, employment, drivers’ licenses and law enforcement impact immigrants’ everyday lives, but federal policy sets the tone that can hinder, or help, these policies. For example, last year the Trump administration expanded the number of reasons an immigrant could be denied a green card, because they’d be considered a “public charge,” someone primarily dependent on government assistance. The additional reasons included services to provide health care, food and housing. Both the new policy and public discussions about this have deterred many immigrants from using public programs they’re legally qualified for.

In that way, a draconian federal policy to exclude people overshadowed many inclusive state and local policies, such as those to provide prenatal care to undocumented women whose permanent home is in the U.S., food assistance to lawful permanent residents, and other programs designed to help immigrants who are an integral part of our communities and economy.

Our research can inform federal policy makers on the benefits of not only reversing some of the punitive actions of the previous administration, but by establishing new national initiatives to help immigrants and refugees become fully incorporated into the society. Our work has shown that inclusive policies at the state level improve immigrant outcomes, independent of exclusionary policies that may also exist. An example of this is a study we conducted in 2018, which found that inclusive state immigrant policies may reduce immigrant poverty by fostering economic advancement.

Young: As we describe in our current piece, key priorities that can advance equity are to decriminalize immigrants by dismantling and eliminating our enforcement infrastructure and creating a path to citizenship for all that is not contingent on increased enforcement against some groups. Within the public health field, we also should work to eliminate categories of “good,” or deserving, versus “bad,” or undeserving immigrants.

Biden’s initial proposals are an encouraging start. But new policies shouldn’t simply be made in response to Trump’s anti-immigrant agenda. For example, Biden has ended the construction of a wall at the U.S.-Mexico border, but indicated there would be investment in a “virtual wall” which likely will increase surveillance of all people living at the border, whether citizens or not. Similarly, he is reviewing enforcement priorities, but even a shift in priorities does not address how enforcement arrests, detentions and deportations have led to stress, instability and discrimination in communities across the country. Public health researchers and advocates are ideally positioned to push the administration to make inclusion a central criterion for changes to the immigration system.

How can researchers and advocates work together to ensure that the pathway to immigration reform is fair and equitable?

Wallace: Where evidence is limited or dated, it invites ideological and harmful, or at best, only partially effective, responses to issues. Researchers need to work with affected communities to identify where solid, empirical data can help inform policies and efforts to improve policies. A few examples of where additional data might be useful include debunking the myths that health care programs are a “magnet” that attract immigrants and that some immigrants are more “deserving” of public services than others.

Young: It’s critical for researchers to work with advocacy groups, such as the California Immigrant Policy Center and the National Immigration Law Center, to support their current advocacy efforts. Public health researchers have established really critical evidence about the harms of restrictive immigration policies and the potential benefits of inclusive policies. That evidence should be translated into effective advocacy information, such as through better dissemination of the academic research to the advocates who are meeting directly with policymakers or through researchers’ direct involvement in talking to policymakers.