How to build a bigger brain 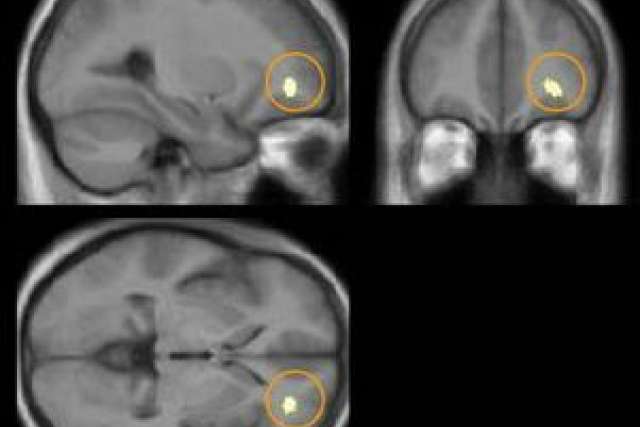 Push-ups, crunches, gyms, personal trainers — people have many strategies for building bigger muscles and stronger bones. But what can one do to build a bigger brain?

That's the finding from a group of researchers at UCLA who used high-resolution magnetic resonance imaging (MRI) to scan the brains of people who meditate. In a study published in the journal NeuroImage and currently available online (by subscription), the researchers report that certain regions in the brains of long-term meditators were larger than in a similar control group.

Specifically, meditators showed significantly larger volumes of the hippocampus and areas within the orbito-frontal cortex, the thalamus and the inferior temporal gyrus — all regions known for regulating emotions.

"We know that people who consistently meditate have a singular ability to cultivate positive emotions, retain emotional stability and engage in mindful behavior," said Eileen Luders, lead author and a postdoctoral research fellow at the UCLA Laboratory of Neuro Imaging. "The observed differences in brain anatomy might give us a clue why meditators have these exceptional abilities."

Research has confirmed the beneficial aspects of meditation. In addition to having better focus and control over their emotions, many people who meditate regularly have reduced levels of stress and bolstered immune systems. But less is known about the link between meditation and brain structure.

In the study, Luders and her colleagues examined 44 people — 22 control subjects and 22 who had practiced various forms of meditation, including Zazen, Samatha and Vipassana, among others. The amount of time they had practiced ranged from five to 46 years, with an average of 24 years.

More than half of all the meditators said that deep concentration was an essential part of their practice, and most meditated between 10 and 90 minutes every day.

The researchers used a high-resolution, three-dimensional form of MRI and two different approaches to measure differences in brain structure. One approach automatically divides the brain into several regions of interest, allowing researchers to compare the size of certain brain structures. The other segments the brain into different tissue types, allowing researchers to compare the amount of gray matter within specific regions of the brain.

Because these areas of the brain are closely linked to emotion, Luders said, "these might be the neuronal underpinnings that give meditators' the outstanding ability to regulate their emotions and allow for well-adjusted responses to whatever life throws their way."

What's not known, she said, and will require further study, are what the specific correlates are on a microscopic level — that is, whether it's an increased number of neurons, the larger size of the neurons or a particular "wiring" pattern meditators may develop that other people don't.

Because this was not a longitudinal study — which would have tracked meditators from the time they began meditating onward — it's possible that the meditators already had more regional gray matter and volume in specific areas; that may have attracted them to meditation in the first place, Luders said.

However, she also noted that numerous previous studies have pointed to the brain's remarkable plasticity and how environmental enrichment has been shown to change brain structure.

Other authors of the study included Arthur Toga, director of the UCLA Laboratory of Neuro Imaging; Natasha Lepore of UCLA; and Christian Gaser of the University of Jena in Germany. Funding for the study was provided by the National Institutes of Health. The authors report no conflicts of interest.

The UCLA Laboratory of Neuro Imaging, which seeks to improve understanding of the brain in health and disease, is a leader in the development of advanced computational algorithms and scientific approaches for the comprehensive and quantitative mapping of brain structure and function. The laboratory is part of the UCLA Department of Neurology, which encompasses more than a dozen research, clinical and teaching programs. The department has ranked No. 1 among its peers nationwide in National Institutes of Health funding for the last seven years (2002–08).