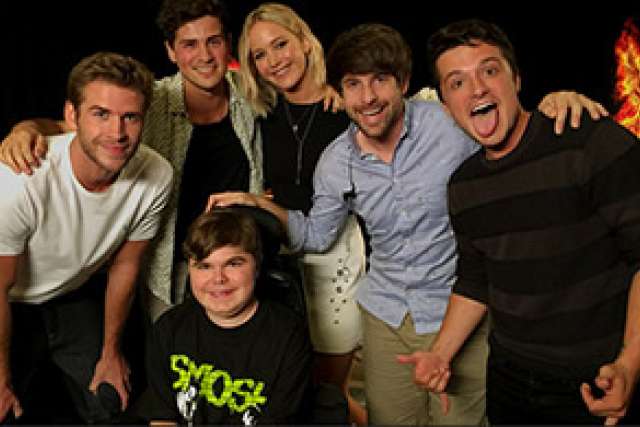 A local teenager living with Duchenne muscular dystrophy will attend tonight’s premiere of “The Hunger Games: Mockingjay, Part 2” — and the backstory couldn’t be more Hollywood.

Thanks to the help of “Hunger Games” stars Jennifer Lawrence, Liam Hemsworth and Josh Hutcherson and the practical-jokes-for-good-causes website “Prank It FWD,” 14-year-old Dylan Miceli-Nelson’s appearance at the star-studded premiere is also a rare opportunity to raise awareness and funds for the Center for Duchenne Muscular Dystrophy at UCLA, which is led by Dylan’s parents, Stan Nelson and Carrie Miceli.

Dylan was diagnosed as a toddler with Duchenne muscular dystrophy and he took his last steps at 13. He’s now confined to a wheelchair. An aspiring filmmaker with his own YouTube channel and “sit-down comedy” stint at The Improv, Dylan’s favorite show is SMOSH, featuring comedy-skit duo and that has a YouTube following of 21 million subscribers.

How Dylan ended up co-starring with Lawrence, Hemsworth and Hutcherson started with an email to SMOSH.

“Hi, I’m Dylan Miceli-Nelson and I live with Duchenne muscular dystrophy. I’m a big fan and was hoping you’d consider helping out boys like me. If you did a video with me, it could be part of our #BeReasonable campaign to get the FDA to approve drugs for Duchenne.”

Someone at the production company that produces both SMOSH and Prank It FWD read the email and reached out to Dylan about an opportunity to co-star with Lawrence, Hemsworth and Hutcherson and pull a prank on SMOSH co-hosts, Anthony Padilla and Ian Hecox. Dylan immediately seized the opportunity.

Dylan is participating in a UCLA experimental trial to test a new drug that he and his parents hope will help him regain some of his lost muscle strength — and lead to the federal Food and Drug Administration’s approval of the first genetic therapy for Duchenne.

The lethal disease strikes one in 5,000 boys, weakening their muscles until they lose the ability to walk and breathe on their own. With comprehensive medical care, some boys now live beyond their 20s.

Dylan’s parents are nationally recognized researchers racing the clock to uncover new therapies to prolong the life of their son and thousands like him.

The Center for Duchene Muscular Dystrophy at UCLA is the leading facility in the western United States providing scientific research, clinical trials and comprehensive medical care tailored to Duchenne patients. To learn more, follow the center on Twitter and Facebook.