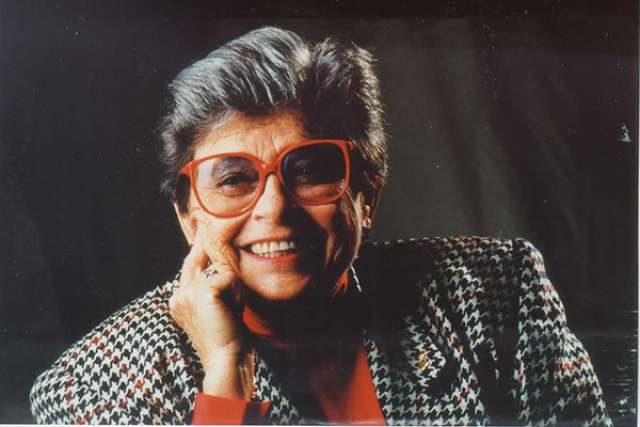 Helene Brown, a UCLA alumna and member of UCLA’s Jonsson Comprehensive Cancer Center who was a trailblazing advocate for cancer research and public education about the disease, died Oct. 4 at her home in Los Angeles. She was 91.

Brown began serving as director of community applications of research at the Jonsson Cancer Center in 1982, following several decades of activism in cancer prevention and early detection. During her tenure at UCLA, she was the recipient of numerous awards for her leadership in addressing cervical and breast cancer issues in the political arena.

Although she had no formal medical training, Brown famously referred herself a "political oncologist," telling the Los Angeles Times in a 1997 profile that "you can save lives through politics."

"When I think about cancer control, cancer advocacy, speaking truth to power — all done with incredible grace, no small amount of sass and a bold sense of humor — I can think of no one other than Helene Brown," Dr. Patricia Ganz, a distinguished professor at the UCLA Fielding School of Public Health and director of cancer prevention and control research at the Jonsson Cancer Center, recently told the Cancer Letter.

Brown is credited with helping to implement community-based cancer-control screening programs in Los Angeles after the signing of the National Cancer Act in 1971 and played a critical role in establishing the Jonsson Cancer Center's presence in the community.

"Helene was one of the giants on whose shoulders our cancer center was built," said Dr. Roshan Bastani, a professor at the Fielding School and director of disparities and community engagement at the Jonsson Cancer Center. "We would not have been one of the first cancer centers in the nation to achieve comprehensive status from the National Cancer Institute had it not been for Helene's extensive community work and advocacy. Helene's contributions were not about building her own personal research portfolio or getting personal accolades. Her focus was on reducing the cancer burden in our society as a whole."

She was also instrumental in getting the American Cancer Society to publish the first guidelines outlining which cancer screenings and tests doctors should give to patients, which greatly increased public awareness of preventive care services such as mammograms and Pap tests.

Brown later turned her focus to local and national tobacco control. She would often meet with top entertainment industry figures to ask them to reduce the amount of cigarette smoking in films and TV shows and to help spread the message of the importance of cancer research by enlisting celebrities to do public service announcements and testify before Congress.

"Helene Brown was nothing short of a force of nature," said Dr. Judith Gasson, professor emerita and senior adviser for research and innovation to the David Geffen School of Medicine at UCLA. "During my 20-year tenure as director of the Jonsson Cancer Center, she was the first board member to welcome me and was my regular lunch companion for updates on the national scene. I think she was most proud of her efforts to publicize the availability of Pap smears to screen for cervical cancer."

Brown is survived by her two sons, Jeffrey Brown and Brian Brown, and sister Naomi Goldrich.

The family asks that any tribute gifts for Brown be made to the Jonsson Cancer Center Foundation.